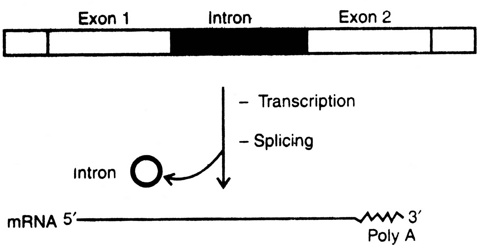 Split Genes is a gene that when transcribed results in pre-mRNA containing exons interrupted by introns. Splicing is generally performed by endonuclease enzymes cleaving the introns at both ends. Phosphodiester bond between sugar and phosphate at the junction between intron and exon is cleaved. The freed 5′-end of the intron joins the branch point sequence of form lariat. Splicing is performed by a large complex called spliceosome. The spliceosome is made up of small nuclear ribonuclear proteins (sn RNP) called snurps. These consist of RNAs which are rich in uracil and are of several types U1, U2, U4, U5 and U6 which are collectively called small nuclear RNAs (sn RNA).

Split genes are first observed in eukaryotes. No split genes are reported yet in prokaryotes. Prokaryotic genes are contiguous. Eukaryotic genes, in contrast, contain segments of DNA that are expressed (called exons) interrupted by segments that are not expressed (called introns). During gene expression, the resulting mRNA contains both exons and introns. It then undergoes splicing by which introns are removed so that it would only contain exon sequences before it is transported to the cytoplasm. Before the discovery of split genes in 1977, all genes analyzed in detail were the bacterial genes. Bacteria were considered to resemble the simpler cell from which eukaryotes must have been evolved. Now, it is supposed that split genes are the laciest condition and bacteria lost their introns only after evolution of most of their proteins,  for the ancient origin of introns has been obtained by the examination of the gene that  the ubiquitous enzyme, triosephosphate isomerase (TPI). The TPI is coded by a gene that  six introns (in vertebrates), five of these are present at the same position as in maize. This shows that five introns were present in the gene before evolution of eukaryotes about 109 years ago (Nyberg and Cronhjort, 1992).

The TPI plays a key role in cell metabolism that catalyses the interconversion of glyceraldehyde 3-phosphate and dihydroxyacetone phosphate, a central step in glycolysis and glucogenesis. By comparing this enzyme in various organisms it appears that the TPI evolved before the divergence of prokaryotes and eukaryotes from a common ancestor cell, progenote (Nyberg and Cronhjort, 1992).

The unicellular organisms under a strong selection pressure minimized the superfluous genome in their cell, whereas there was no such pressure on multicellular organisms. That is why Aspergillus has five introns and Saccharomyces has none. Precise loss of introns would have occurred by deletion in prokaryotes. The TPI is thought to be evolved to its final three dimensional structure before eubacteria, archaeobacteria and eukaryotic lineage split off from progenote (Nyberg and Cronhjort, 1992). At first U1 sn RNP recognize and-break the 5’splice site of the intron and bring it closer to branch site. Then the complex of sn RNP of U2, U4, U5 and U6 bind to the intron. The complex of snRNPs and precursor mRNA of the intron is called spliceosome. The spliceosome is looped out. This loop of intron is called lariat which is discarded and degraded. The exons on either side of the removed intron are brought closer and ligation seals them together.

The information in the mRNA is then decoded in the ribosome wherein amino acids are assembled to form proteins. Decoding of the mRNA entails that the individual bases in the mRNA were read three at a time, each triplet of bases corresponding for a single amino acid. The gene coding for a specific protein is surrounded by sequences of DNA that tells an enzyme called RNA polymerase where to begin transcribing the RNA and where to stop. The signal that tells where to start making RNA is called the promoter.

During 1970, in some mammalian viruses (e.g. adenoviruses) it was found that the DNA sequences coding for a polypeptide were not present continuously but were split into several pieces. Therefore, these genes were variously named as split genes or introns (Gilbert, 1978), interrupted genes or intervening sequences (Lewin, 1980), inserts (Weismann, 1978), Junk DNA. For the discovery of split genes in adenoviruses and higher organisms, Richards J.Roberts and Phillip Sharp were awarded Nobel prize in 1993. Their discovery led to a deeper understanding in the field of molecular biology and triggered researches concerning the development of different diseases.