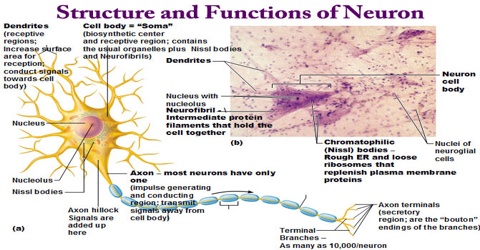 Structure and Functions of Neuron

Structure and Functions of Neuron

Nerve cells together with neuroglia form the tissues of the nervous system. A neuron is a specialized type of cell found in the bodies of all eumetozoans. Only sponges and a few other simpler animals lack neurons. The features that define a neuron are electrical excitability and the presence of synapses, which are complex membrane junctions that transmit signals to other cells. A typical neuron is divided into three parts: the soma or cell body, dendrites, and axon. The soma is usually compact; the axon and dendrites are filaments that extrude from it. Dendrites typically branch profusely, getting thinner with each branching, and extending their farthest branches a few hundred micrometers from the soma.

Neurons communicate by chemical and electrical synapses in a process known as neurotransmission, also called synaptic transmission. The fundamental process that triggers the release of neurotransmitters is the action potential, a propagating electrical signal that is generated by exploiting the electrically excitable membrane of the neuron. This is also known as a wave of depolarization. The Basic Functions of a Neuron

All neurons have three basic functions. These are to:

These neuronal functions are reflected in the anatomy of the neuron. The cell bodies of some PNS neurons, such as the motor neurons that control skeletal muscle, the type of muscle found in your arm or leg, are located in the CNS. These motor neurons have long extensions (axons) that run from the CNS all the way to the muscles they connect with (innervate). The cell bodies of other PNS neurons, such as the sensory neurons that provide information about touch, position, pain, and temperature, are located outside of the CNS, where they are found in clusters known as ganglia. The axons of peripheral neurons that travel a common route are bundled together to form nerves. A cell specialized to transmit electrical nerve impulses and so carry information from one part of the body to another.

The key to neural function is the synaptic signaling process, which is partly electrical and partly chemical. The electrical aspect depends on properties of the neuron’s membrane. Like all animal cells, the cell body of every neuron is enclosed by a plasma membrane, a bilayer of lipid molecules with many types of protein structures embedded in it.

Each neurone has an enlarged portion the cell body (perikaryon), containing the nucleus; from the body extend several processes (dendrites) through which impulses enter from their branches. A longer process, the nerve fibre (axon), extends outwards and carries impulses away from the cell body. This is normally unbranched except at the nerve ending. The point of contact of one neurone with another is known as a synapse.

A nerve fibre: a single process extending from the cell body of a neurone and carrying nerve impulses away from it.

Carries nerve impulses from adjacent neurons into the cell body.

One of the shorter branching processes of the cell body of a neurone. All dendrites have synaptic knobs at the ends, which are the “connections” to adjoining nerves.

Reaching a synapse, an impulse causes the release of a neurotransmitter, which diffuses across the gap and triggers an electrical impulse in the next neurone. Some brain cells have more than 15,000 synapses.

The minute gap across which nerve impulses pass from one neurone to the next, at the end of a nerve fibre.