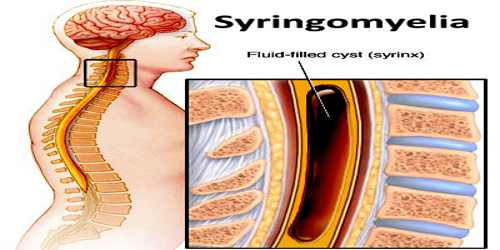 Syringomyelia is a chronic disease of the spinal cord characterized by the presence of fluid-filled cavities and leading to spasticity and sensory disturbances. It is also called hydrosyringomyelia, Morvan’s disease. Syringomyelia may also cause a loss of the ability to feel extremes of hot or cold, especially in the hands. There is also a disorder that generally leads to a cape-like bilateral loss of pain and temperature sensation along the back and arms. Each patient experiences a different combination of symptoms. These symptoms typically vary depending on the extent and, often more critically, to the location of the syrinx within the spinal cord. Syringomyelia is most common in adults aged 20 to 40, but it can happen to people of all ages. Men are more likely to get it than women. Some people don’t have symptoms, and might not even know they have it. But if it’s a severe case, it causes problems that need to be treated. It has a prevalence estimated at 8.4 cases per 100,000 people, with symptoms usually beginning in young adulthood. Signs of the disorder tend to develop slowly, although sudden onset may occur with coughing, straining, or myelopathy.

Generally, there are two forms of syringomyelia: congenital and acquired. In addition, one form of the disorder involves the brainstem. The brainstem controls many of our vital functions, such as respiration and heartbeat. When syrinxes affect the brainstem, the condition is called syringobulbia. Other signs and symptoms of syringomyelia may include:

If patient have had a spinal injury, it’s important to watch for these symptoms. It may take months or even years after their injury for syringomyelia to develop. If patient’s symptoms are negatively affecting their life, then neurologist will recommend surgery. The goal of surgery is to relieve the pressure on their spinal cord. The type of surgery will depend on the cause of their syringomyelia.

Surgery doesn’t always effectively restore the flow of cerebrospinal fluid, and the syrinx may remain, despite efforts to drain the fluid from it. The syrinx may grow over time, requiring additional treatment. Even after treatment, some signs and symptoms of syringomyelia may remain, as a syrinx can cause permanent spinal cord and nerve damage.