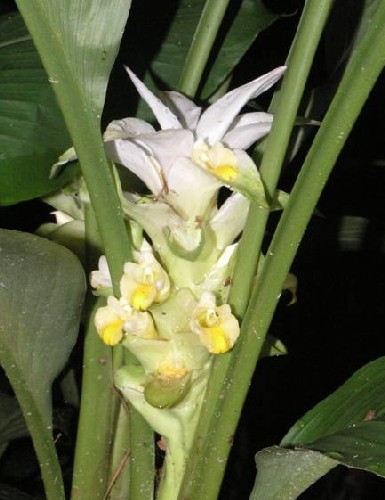 Plants and plant based medicaments are the basis of many of modern pharmaceuticals we use today for various ailments. The phytochemical research based on ethno-pharmacological information is generally considered an effective approach on the discovery of new anti-infective agents from higher plants.

Curcuma is a rhizomatous herb belonging to Zingiberaceae family. The plants belonging to this family are found to be a rich source of substances of phytochemical interest. Number of plants from this family is used in traditional system of medicine. Turmeric powder, curcumin and its derivatives and many other extracts from the rhizomes were found to be bioactive. The main activities of essential oils and plant extracts have been found to be antimicrobial, anti inflammatory, anticancer and antiviral.

Curcuma longa is a perennial plant having a short stem with large oblong rhizomes, which are often branched and brownish yellow in colour. Various experiments proved the presence of bioactive compounds from curcuma and show that  it has antimicrobial, anti-inflammatory, anticancer and antiviral activities.

The present study involves the use of various techniques like Gas chromatography, Mass Spectrometry, Thin layer chromatography analysis for phytochemical characterization of the herbal drug preparations. The antimicrobial activity can be tested using agar diffusion technique. By using this work, the antibacterial drugs can be developed or can be used for the improvement of the existing medicines.

The Plant Family of Curcuma Longa

Turmeric (Curcuma longa L.) is an herbaceous perennial plant belonging to the family, Zingiberaceae and order Scitaminae. It is an ancient, most valuable, sacred spice of Bangladesh that contains appreciable quantities of proteins (6.3%), lipids (5.1%), carbohydrates (69.4%) and fibre (2.6%). Turmeric is rich in minerals like phosphorus,

calcium, iron and vitamin A. Turmeric is a horticultural root-crop that is important not only as a spice and cosmetic, but also as a medicinal plant worldwide.

Turmeric originated in South-East Asia. It is grown in Bangladesh in about 16.06 thousand hectare with an annual production of 41.50 thousand tons. Bangladesh produces nearly 20 % of its total demand and the rest is imported. So, cultivation of turmeric should be emphasized.

This negative effect of agricultural practices could be reversed by the correct utilization of manures and/ or crop residues within cropping system either alone or in combination with organic fertilizer. Beside these, utilization of organic manure in agriculture is recommended for retaining productivity of problem soils, reducing the usages of chemical fertilizer, improving economy in agriculture and minimizing environmental problems.

Organic farming assumes significant globally towards sustainable production and quality up gradation of turmeric. The adverse effects of continuous use of high dose of chemical fertilizers on soil health and environment were realized; hence, the farmers are also showing considerable inclination towards traditional farming with least usage of fertilizers. The role of organic manures in improving soil structure and fertility is well understood. Organic manures have positive influence on soil texture and structure, better water holding capacity and drainage which in turn help for better growth and development of rhizomatous crop like turmeric.

The plant genus of Curcuma Longa

Curcuma longa is a perennial plant with roots or tubers oblong-palmate, and deep orange inside. Leaves  about 2 feet long, lanceolate, long, petioled, tapering at each end, smooth, of a uniform green. Flowers are dull yellow, three or five together surrounded by bracteolae. It is propagated by cuttings from the root. In fresh state, the roots have an aromatic and spicy fragrance, which by drying gives way to a more medicinal aroma. Fresh Turmeric leaves are used in some regions of Indonesia and in Western Sumatra as a flavouring. Turmeric comes from the root of Curcuma longa.

Ground Tumeric comes from fingers which extend from the root. It is boiled or steamed and then dried, and ground. Turmeric is mildly aromatic and has scents of orange or ginger. It has a pungent, bitter flavor. Turmeric is a necessary ingredient of curry powder. It is used extensively in Indian dishes, including lentil and meat dishes, and in Southeast Asian cooking. Turmeric is routinely added to mustard blends and relishes. It also is used in place of saffron to provide color and flavor.

Turmeric has long been used in Asian traditional medicine as a stomach tonic and blood purifier, and for the treatment of liver ailments, skin diseases and wound healing. It also was used externally, to heal sores, and as a cosmetic.

In Thailand, Turmeric rhizomes have been use to treat dizziness, gonorrhea and peptic ulcers and as an appetite stimulant, carminative, astringent and antidiarrheal. Externally the rhizome is used to treat insect bites, ringworm, wounds, bleeding, and the teeth and gums.
In Thailand, Turmeric is one of the most important folk remedies, with official sanction for use.

Among the herbs often classified as spices, Turmeric is one of the best-researched for pharmacologicaleffects.
Today, it is considered potentially beneficial in treating or reducing symptoms associated with a wide range of health conditions, due to its antioxidant, antitumor, anti-inflammatory, and antibacterial effects.

The yellow-orange color of Turmeric comes from yellow pigment found in the rhizomes called curcumin. Supplements standardized to curcumin are now found in the market.

Specific complaints for which Turmeric has been shown effective include peptic ulcers, artherosclerosis, and alcohol induced liver toxicity. In one clinical study of smokers,

curcumin was found to reduce the incidence of cell mutation. The anti-inflammatory activity of Turmeric has been compared to that of topical hydrocortisone.

In modern medicine Turmeric is used to treat the following conditions and symptoms:
1. Digestive disorders: Curcumin induces the flow of bile, which breaks down fats. Extracts of turmeric root inhibited gastric secretion and protected against injuries caused by medications such as indomethacin and reserpine in an animal study.

Further studies are needed to confirm these effects in humans.
2. Arthritis: Curcumin is an anti-inflammatory agent that relieves the aches and pains associated with arthritis.
3. Cardiovascular conditions
4. Cancer: Turmeric decreased symptoms of skin cancers and reduced the incidence of chemically caused breast cancer in lab animals.
5. Bacterial infection: The herb’s volatile oil functions as an external antibiotic, preventing bacterial infection in wounds.                          Description of Curcuma longa:

Turmeric (Curcuma longa) has been used for 4,000 years to treat a variety of conditions. Studies show that turmeric may help fight infections and some cancers, reduce inflammation, and treat digestive problems, and it has gotten a lot of press lately.

But remember several facts when you hear news reports about turmeric. First, many studies have taken place in test tubes and animals, and turmeric may not work as well in humans. Second, some studies have used an injectable form of curcumin, the active substance in turmeric. Finally, some of the studies show conflicting evidence.

Turmeric is widely used in cooking and gives Indian curry its flavor and yellow color. It is also used in mustard and to color butter and cheese. Turmeric has been used in both Ayurvedic and Chinese medicine as an anti-inflammatory, to treat digestive and liver problems, skin diseases, and wounds.

Curcumin is also a powerful antioxidant. Antioxidants scavenge molecules in the body known as free radicals, which damage cell membranes, tamper with DNA, and even cause cell death. Antioxidants can fight free radicals and may reduce or even help prevent some of the damage they cause.

In addition, curcumin lowers the levels of two enzymes in the body that cause inflammation. It also stops platelets from clumping together to form blood clots.

Part Used: Dried rhizome.
Habitat: Southern Asia. Cultivated in China, Bengal and Java.
Properties: Pungent and bitter in flavor, cold in nature, it is related to the liver, gall-bladder and heart channels.

The plant is a native of southern Asia (probably India) and is cultivated extensively throughout the warmer parts of the world.

C.longa is a perennial herb, with a short stem and tufted leaves. The rhizomes, which are short and thick, constitute the turmeric of commerce.

Oil of C.longa leaves obtained by steam distillation was given orally to study its effects on the exudative and proliferative phases of the inflammatory reaction, using the techniques of carrageenin-induced paw edema and cotton pellet methods in male albino rats. The anti-inflammatory activity was compared with Phenylbutazone. In carrageenin- induced edema, 1.6ml/kg of the volatile oil had as much anti-inflammatory activity as that of 100mg/kg Phenylbutazone. The oil was also found to be potent in cotton pellet granuloma studies.

An oral dose of 500mg/kg of the ethanol extract of turmeric produced significant antiulcerogenic activity in rats subjected to hypothermic-restraint stress and pyloruic ligation. It also showed marked anti-ulcerogenic effect in indomethacin and reserpine, induced-gastric ulcers in rats.

The extract had a highly significant protective effect against cytodestructive agents. Turmeric extract not only increased the gastric wall mucus significantly but also restored the non-protein sulfhydryl (NP-SH) content in the glandular stomachs of the rats.

Turmeric is reported to have anti-fertility activity as observed with experimental animals. The petroleum ether and aqueous extracts showed 100 percent anti-implantation in rats at a dose of 200mg/kg body wt fed orally on day 1 to 7 of pregnancy.

Of the 50 cases of conjunctivitis, 25 cases were treated with Haridra Eye drops (HEB) and other 25 cases with soframycin eye drops (SED). Clinical symptoms started subsiding from the 3rd day and all were cured by the 6th day (except 2 patients) in patients treated with HED. In SED patients symptoms subsided from the 4th day and complete relief took 7 days

except for 2 cases, which took 9 days. This indicates that HED has a definite role in conjunctivitis. Bacteriological study shows that Haridra act, effectively on E.coli, Staphylococus aureus, Klebsella and Pseudomonas.

The Volatile oil of C.longa when given orally, was found most effective in the treatment of bronchial asthma than when given intramuscularly.

The clastogenic potential of Curcuma longa in experimental rats in in vivo conditions has been evaluated. A single acute dose treatment (500mg/kg b.w.) could not significantly induce micronucleated polychromatic erythrocytes but caused considerably higher chromosomal abberrations.

In Indian systems of medicine, turmeric is used to some extent as a stomachic, tonic and blood purifier. It is also prescribed as an antiperiodic alterative. Externally, it is applied to indolent ulcers. A decoction of the rhizome is said to relieve the pain of purulent ophthalmia. Oil of turmeric, distilled from the dried rhizomes, has feeble antiseptic properties. It is an antacid, and, in small doses, acts as a carminative, stomachic, appetiser and tonic. In large doses, however, it appears to act as an antispasmodic inhibiting excessive peristaltic movements of the intestines. Turmeric also possesses anti-inflammatory property.

Curcuma Longa is widely used in Aryuvedic, Unani-tibb and Sidha herbal systems as an antioxidant, antispasmodic, anti-inflammatory and antimicrobial.

Medicinally Turmeric is respected by all natural therapists and beauticians of East Asia due to its strong anti-inflammatory, antiseptic and antioxidants. In many cosmetics, there’s Turmeric extract as one of the ingredients and it is recognized as an effective sunscreen and bio-pesticide.

Turmeric‘s carminative and stomachic activities acts effectively in the treatment of digestive disorders such as flatulence, bloating, and appetite loss. Turmeric is taken for both internally and externally, and in a form of paste.

Turmeric’s antibacterial and anti-arthritic and is used as a cholagogue as it increases the secretion of bile, pancreatic, and gastric juices. Turmeric is scientifically observed as anticarcinogenic, antiplatelet, antimutagenic and a good digestive.