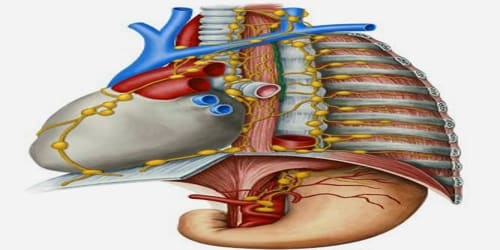 Definition: The thoracic duct is the largest lymphatic vessel in the human body. Around 75% of the lymph from the entire body (aside from the right upper limb, right breast, right lung and right side of the head and neck) passes through the thoracic duct. The thoracic duct begins in the abdomen, tracks alongside the aorta and esophagus, and eventually joins with the left brachiocephalic vein. The typical length of this duct in an adult averages between 38 and 45cm, while the diameter is about 5 to 7 mm.

It originates from the second lumbar vertebra level and goes to the neck’s root. The duct arises from the combination of the left and right lumbar trunks and the intestinal trunk in the abdomen. The thoracic duct gets extended in the chest area and from there it curves toward the internal jugular vein and the left carotid artery at the C7 vertebra. It travels through the aortic aperture diaphragm and rises along the posterior mediastinum.

The thoracic duct is also known as the left lymphatic duct, alimentary duct, chyliferous duct, and Van Hoorne’s canal. The other duct is the right lymphatic duct. It carries chyle, a liquid containing lymph and emulsified fats, rather than pure lymph. Thus when it ruptures, the resulting flood of liquid into the pleural cavity is known as chylothorax. Structure and Functions of the Thoracic Duct:

The thoracic duct originates in the abdomen from the confluence of the right and left lumbar trunks and the intestinal trunk, forming a significant pathway upward called the cisterna chyli. It traverses the diaphragm at the aortic aperture and ascends the superior and posterior mediastinum between the descending thoracic aorta (to its left) and the azygos vein (to its right).

The thoracic duct crosses the diaphragm at the aortic hiatus at the level of the twelfth thoracic vertebra. The aortic opening is located in the posterior mediastinum and is formed either side by the left and right crura of the diaphragm. The duct will also lie anterior to the anterior scalene muscle and left phrenic nerve before its final destination. The fluid drains at the level of the venous angle (Pirogoff’s angle) between the left subclavian vein and the left internal jugular vein, where it reenters the systemic venous circulation. It is often dilated or enlarged at its terminal segment.

The lymph transport, in the thoracic duct, is mainly caused by the action of breathing, aided by the duct’s smooth muscle and by internal valves which prevent the lymph from flowing back down again. There are also two valves at the junction of the duct with the left subclavian vein, to prevent the flow of venous blood into the duct. In adults, the thoracic duct transports up to 4 L of lymph per day.

Variations – The thoracic duct occasionally divides into a right and left duct, with the left entering the venous system as normal, and the right draining into the right subclavian vein. The duct may also drain into the left internal jugular vein, or into the left brachiocephalic vein.