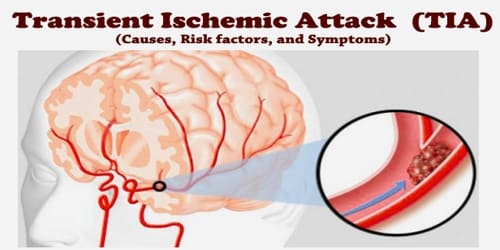 The disruption in blood supply results in a lack of oxygen to the brain. This can cause sudden symptoms similar to a stroke, such as speech and visual disturbance, and numbness or weakness in the face, arms, and legs.

Some important facts include:

While a TIA must by definition be associated with symptoms, a stroke may be symptomatic or silent. In a silent stroke, also known as silent cerebral infarct (SCI), there is permanent infarction present on imaging, but there are no immediately observable symptoms. An SCI often occurs before or after a TIA or major stroke. Causes and Risk factors of TIA: TIAs typically happen because a blood clot gets lodged in an artery that supplies blood to the brain. Without regular blood flow, our brain is starved for oxygen and can’t work like it normally does.

There are three major mechanisms of ischemia in the brain: embolism traveling to the brain, in situ thrombotic occlusions in the intracranial vessels supplying the parenchyma of the brain, and stenosis of vessels leading to poor perfusion secondary to flow-limiting diameter. Globally, the vessel most commonly affected is the middle cerebral artery.

TIAs are usually caused by one of three things:

Certain things can increase our chances of having a TIA, including:

People over 60 years of age and people of Asian, African or Caribbean descent are also at a higher risk of having a TIA.

People can control or treat a number of factors — including certain health conditions and lifestyle choices — that increase their risk of a stroke. Signs and Symptoms of TIA: When someone’s having a TIA, it looks like a stroke. The big difference is that TIAs last just a few minutes and the symptoms usually go away in an hour. The most common presenting symptoms of TIA are focal neurologic deficits, which can include, but are not limited to:

People may have more than one TIA, and the recurrent signs and symptoms may be similar or different depending on which area of the brain is involved.