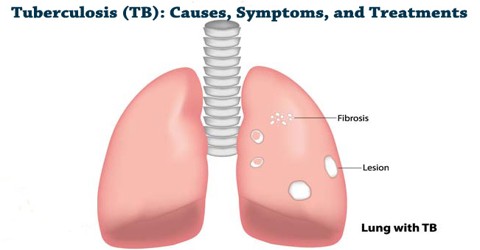 Tuberculosis or TB is a multisystemic infectious disease caused by Mycobacterium tuberculosis, a rod-shaped bacterium. It is also an infectious disease that usually affects the lungs. TB can also affect any other part of the body, including kidneys, brain or bones. This is called non-pulmonary TB – and is not infectious.

Through the air, just like a cold or the flu. When someone who’s sick coughs, sneezes, talks, laughs, or sings, tiny droplets that contain the germs are released. If anyone breathes in these nasty germs, they get infected. TB is the most common cause of infectious disease-related mortality worldwide, about 1.1 million to 1.7 million people die from it each year worldwide. In 2014, there were 9.6 million cases of active TB which resulted in 1.5 million deaths. More than 95% of deaths occurred in developing countries. About 80% of people in many Asian and African countries test positive while 5–10% of people in the United States population tests positive by the tuberculin test. Tuberculosis has been present in humans since ancient times. TB symptoms can span such a wide range that TB is termed the “great imitator” by many who study infectious diseases because TB symptoms can mimic many different diseases.

Tuberculosis or TB is spread through the air when people who have active TB in their lungs cough, spit, speak, or sneeze. People with latent TB do not spread the disease. Active infection occurs more often in people with HIV/AIDS and in those who smoke. Diagnosis of active TB is based on chest X-rays, as well as microscopic examination and culture of body fluids. Diagnosis of latent TB relies on the tuberculin skin test (TST) or blood tests.

The main cause of Tuberculosis (TB) is Mycobacterium Tuberculosis (MTB), a small, aerobic, nonmotile bacillus. It is spread through the air when a person with TB, whose lungs are affected coughs, sneezes, spits, laughs, or talks. TB is a bacterial infection. Sometimes the immune system can’t kill the bacteria, but manages to prevent it spreading in the body. If the immune system fails to kill or contain the infection, it can spread within the lungs or other parts of the body and symptoms will develop within a few weeks or months. This is known as active TB. Since antibiotics began to be used to fight TB, some strains have become resistant to drugs. Multidrug-resistant TB (MDR-TB) arises when an antibiotic fails to kill all of the bacteria, with the surviving bacteria developing resistance to that antibiotic and often others at the same time.

MDR-TB is treatable and curable only with the use of very specific anti-TB drugs, which are often limited or not readily available. In 2012, around 450,000 people developed MDR-TB. Tobacco use has also been found to increase the risk of developing active TB. Over 20 percent of TB cases worldwide are related to smoking.

Signs and Symptoms of TB Treatment and Vaccination for TB

The majority of TB cases can be cured when the right medication is available and administered correctly. The precise type and length of antibiotic treatment depends on a person’s age, overall health, potential resistance to drugs, whether the TB is latent or active, and the location of infection. Antibiotics are usually required to be taken for a relatively long time. The standard length of time for a course of TB antibiotics is about 6 months. TB medication can be toxic to the liver, and although side effects are uncommon, when they do occur, they can be quite serious.

The only available vaccine as of 2011 is Bacillus Calmette-Guérin (BCG). In children it decreases the risk of getting the infection by 20% and the risk of infection turning into disease by nearly 60%. It is the most widely used vaccine worldwide, with more than 90% of all children being vaccinated. The immunity it induces decreases after about ten years. Part of the reasoning against the use of the vaccine is that it makes the tuberculin skin test falsely positive, reducing the test’s use in screening. A number of new vaccines are currently in development. Avoiding other people by not going to school or work, or sleeping in the same room as someone, will help to minimize the risk of germs from reaching anyone else. Wearing a mask, covering the mouth, and ventilating rooms can also limit the spread of bacteria.