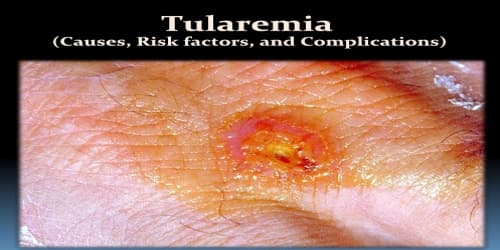 Definition: Tularemia, also known as rabbit fever, is a rare infectious disease that typically attacks the skin, eyes, lymph nodes and lungs. Symptoms may include fever, skin ulcer, and enlarged lymph nodes. Occasionally, a form that results in pneumonia or a throat infection may occur.

Tularemia is an infectious disease that typically infects:

Humans can become infected through several routes, including:

In addition, humans could be exposed as a result of bioterrorism.

Tularemia can often be treated with antibiotics. Early treatment offers a good outlook for complete recovery. However, some severe cases may be fatal even with treatment. Causes and Risk factors of Tularemia: Tularemia is caused by the bacteria Francisella tularensis which is typically spread by ticks, deer flies, contact with infected animals. However, tularemia occurs worldwide, especially in rural areas. The organism can live for weeks in soil, water, and dead animals.

In general, People can get tularemia through:

Skin exposure is the most common form of the disease. Inhalation through the lungs is the deadliest form of tularemia. If it’s left untreated, other forms of the disease may eventually reach the:

The disease can cause serious complications and sometimes death.

Although anyone of any age can develop tularemia, engaging in certain occupations or activities or living in certain areas pose a greater risk.

People at an increased risk for tularemia include:

Cats and dogs can acquire the disease from the bite of a tick or flea that has fed on an infected host, such as a rabbit or rodent. For treatment of infected cats, antibiotics are the preferred treatment, including tetracycline, chloramphenicol or streptomycin. Long treatment courses may be necessary as relapses are common. Complications of Tularemia: Males are affected more often than females. Tularemia occurs most frequently in the young and the middle-aged. Left untreated, tularemia can be fatal. Other possible complications include:

The tularemia bacterium was first isolated by G.W. McCoy of the United States Public Health Service plague lab and reported in 1912. Scientists determined tularemia could be dangerous to humans; a human being may catch the infection after contacting an infected animal. The ailment soon became associated with hunters, cooks and agricultural workers.