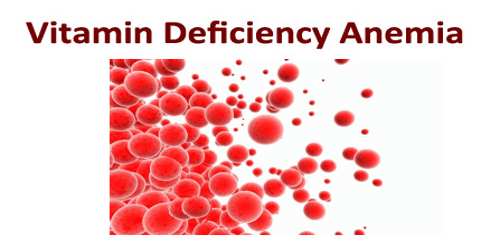 Vitamin deficiency anemia is a lack of healthy red blood cells caused when you have lower than normal amounts of certain vitamins. Vitamins linked to vitamin deficiency anemia include folate, vitamin B-12 and vitamin C. Anemia is a condition in which the body does not have enough healthy red blood cells. Red blood cells provide oxygen to body tissues. The most common initial symptom is feeling tired. Other symptoms may include shortness of breath, pale skin, chest pain, numbness in the hands and feet, poor balance, a smooth red tongue, poor reflexes, depression and confusion. Without treatment some of these problems may become permanent. Deficiency of vitamin B12 or folate deficiency most often develops due to a lack of these vitamins in the diet or an inability to absorb these vitamins from the digestive tract. Deficiency of folate (folic acid) is sometimes caused by drugs used to treat cancer.

Not all anemias are caused by a vitamin deficiency. Other causes include iron deficiency and certain blood diseases. That’s why it’s important to have your doctor diagnose and treat your anemia. Vitamin deficiency anemia can usually be corrected with vitamin supplements and changes to people’s diet. Signs and symptoms of vitamin deficiency anemia include: Once blood tests show a person has anemia, tests are done to determine if a deficiency of vitamin B12 or folate is the cause. Anemia due to vitamin B12 or folate deficiency is suspected when large (macrocytic) red blood cells and multilobed (hypersegmented) neutrophils (a type of white blood cell) are seen in a blood sample that is examined under a microscope. Reduction in the number of white blood cells and platelets also can occur, especially when people have had vitamin deficiency anemia for a long time.

For milder cases of vitamin B-12 deficiency, treatment may involve changes to patient’s diet and vitamin B-12 supplements in pill form or as a nasal spray.

Treatment for anemia related to vitamin C deficiency is with vitamin C tablets. Additionally, patients increase their intake of foods and beverages that contain vitamin C.