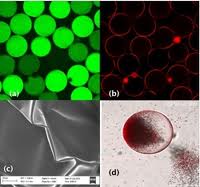 Colloid – … called colloidal solutions or colloidal suspensions … and because colloids have the appearance of solutions … freely moving about between the water molecules of the solution .

2) Stability— As already stated, charges play an important role in determining the stability of a colloidal system.Colloids, especially lyophobic colloids having like charges on particle surface repel each other and prevent flocculation in suspensions.

e.g- Colloidal dispersion of gelatin is used in coating over tablets and granules which upon drying leaves a uniform dry film over them and protect them from adverse conditions of the atmosphere.

3) Absorption— As colloidal dimensions are small enough,they have a huge surface area. Hence, the drug constituted colloidal form is released into the vicinity in large amount.

e.g- sulphur colloid gives a large quantity of sulphur and this often leads to sulphur toxicity.

4) Dissolution — Due to huge surface area, the dissolution rate is very large as stated by Noyes-Whitney equation.

5) Targeted Drug Delivery— Liposomes are of colloidal dimensions and are preferentially taken up by the liver and spleen. Hence, principle of colloids is also used in targeted drug delivery system.