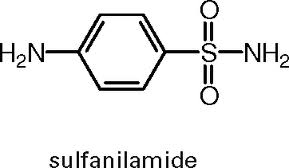 Sulfa allergies are common,hence medications containing sulfonamides are prescribed carefully. It is important to make a distinction between sulfa drugs and other sulfur-containing drugs and additives, such as sulfates and sulfites, which are chemically unrelated to the sulfonamide group, and do not cause the same hypersensitivity reactions seen in the sulfonamides.

In bacteria, antibacterial sulfonamides act as competitive inhibitors of the enzyme dihydropteroate synthetase (DHPS), an enzyme involved in folate synthesis.

Other uses of Sulfonamide :

Sulfasalazine, in addition to its use as an antibiotic, is also used in the treatment of inflammatory bowel disease.

Sulfonamides are prepared by the reaction of a sulfonyl chloride with ammonia or an amine. Certain sulfonamides (sulfadiazine or sulfamethoxazole) are sometimes mixed with the drug trimethoprim, which acts against dihydrofolate reductase.

Side effects  of sulfonamides:

Sulfonamides have the potential to cause a variety of untoward reactions, including urinary tract disorders, haemopoietic disorders, porphyria and hypersensitivity reactions. When used in large doses, they may cause a strong allergic reaction. Two of the most serious are Stevens Johnson syndrome and toxic epidermal necrolysis (also known as Lyell syndrome).

Approximately 3% of the general population have adverse reactions when treated with sulfonamide antimicrobials. Of note is the observation that patients with HIV have a much higher prevalence, at about 60%. People who have a hypersensitivity reaction to one member of the sulfonamide class are likely to have a similar reaction to others.

Two regions of the sulfonamide antibiotic chemical structure are implicated in the hypersensitivity reactions associated with the class.

Spectinomycin (marketed as the hydrochloride salt spectinomycin hydrochloride under the trade name Trobicin) is an aminocyclitol antibiotic, closely related to the aminoglycosides, produced by the bacterium Streptomyces spectabilis.

It binds to the 30S ribosomal subunit in invading bacteria and interrupts protein synthesis.

One form of resistance has emerged in the 16S ribosomal RNA in Pasteurella multocida.

It is given by injection to treat gonorrhea, especially in patients who are allergic to penicillins. This antibiotic is no longer available in the United States.

A resistance-conferring gene for spectinomycin can also be used as a selection marker in bacteria for molecular cloning purposes.

Side effects of Spectinomycin: