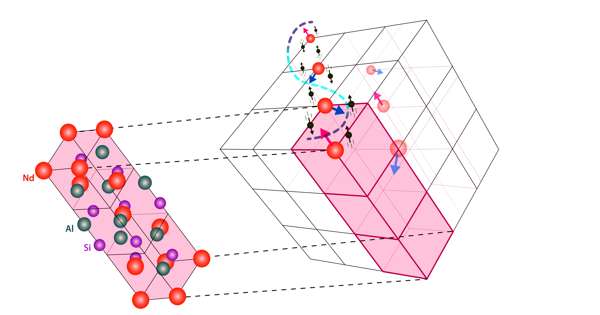 A Crystal with Unusual Spiral Magnetism has been Discovered by Scientists

According to scientists at the National Institute of Standards and Technology who examined a new crystal in which they appear, an exotic form of magnetism has been discovered and linked to an equally exotic type of electron (NIST). The magnetism is generated and protected by the crystal’s unique electronic structure, providing a mechanism that could be used to create fast, robust information storage devices.

The newly invented material has an unusual structure that conducts electricity while also causing the flowing electrons to behave as massless particles whose magnetism is linked to their motion direction. Such Weyl electrons have elicited new electrical conductivity-related behaviors in other materials. However, in this case, the electrons encourage the spontaneous formation of a magnetic spiral.

“Our findings provide a rare example of these particles driving collective magnetism,” Collin Broholm, a physicist at Johns Hopkins University who led the experimental work at the NIST Center for Neutron Research, said (NCNR). “Our experiment illustrates a unique form of magnetism that can arise from Weyl electrons.”

The findings, which appear in Nature Materials, reveal a complex relationship among the material, the electrons flowing through it as current, and the magnetism the material exhibits.

The newly invented material has an unusual structure that conducts electricity but makes the flowing electrons behave as massless particles, whose magnetism is linked to the direction of their motion.

We sometimes imagine each of a refrigerator magnet’s iron atoms as having a bar magnet piercing it with its “north” pole pointing in a specific direction. This image depicts the spin orientations of the atoms, which are parallel. The material studied by the team was unique. It is a “semimetal” composed of silicon, aluminum, and neodymium. These three elements combine to form a crystal, which means that its constituent atoms are arranged in a regular repeating pattern. A crystal, on the other hand, violates inversion symmetry, which means that the repeating pattern is different on one side of a crystal’s unit cells—the smallest building block of a crystal lattice—than the other. This arrangement stabilizes the electrons flowing through the crystal, which in turn drives unusual behavior in its magnetism.

The stability of electrons is manifested as uniformity in the direction of their spins. The electrons that flow through most materials that conduct electricity, such as copper wire, have spins that point in random directions. Not so in a semimetal, where the broken symmetry converts flowing electrons into Weyl electrons with spins oriented either in the same direction as the electron or in the exact opposite direction. The locking of the spins of the Weyl electrons to their direction of motion—their momentum—is what causes the semimetal’s unusual magnetic behavior.

The three types of atoms in the material all conduct electricity, acting as stepping stones for electrons as they move from atom to atom. Magnetism, on the other hand, is only found in neodymium (Nd) atoms. They are vulnerable to the influence of Weyl electrons, which push the Nd atom spins in an unusual manner. Look along any row of Nd atoms that runs diagonally through the semimetal to see what the researchers call a “spin spiral.”

“A simplified way to think about it is that the first Nd atom’s spin points to 12 o’clock, the next to 4 o’clock, and the third to 8 o’clock,” Broholm explained. “The pattern then repeats itself. This lovely spin ‘texture’ is caused by Weyl electrons passing by neighboring Nd atoms.”

The special magnetism arising in the crystal required the collaboration of many groups within Johns Hopkins University’s Institute for Quantum Matter. It featured teams working on crystal synthesis, complex numerical calculations, and neutron scattering experiments.

“We greatly benefited from the extensive amount of neutron diffraction beam time that was available to us at the NIST Center for Neutron Research for the neutron scattering,” said Jonathan Gaudet, one of the paper’s co-authors. “Without the beamtime, we would have missed out on these wonderful new physics.”

Each loop of the spin spiral is approximately 150 nanometers long, and the spirals appear only at temperatures below 7 K. According to Broholm, there are materials with similar physical properties that function at room temperature and could be used to create efficient magnetic memory devices.

“Magnetic memory technology, such as hard disks, typically requires the creation of a magnetic field for them to work,” he explained. “You can store information in this class of materials without needing to apply or detect a magnetic field. Reading and writing data electrically is faster and more reliable.”

Understanding the effects that the Weyl electrons cause may also shed light on other materials that have confounded physicists.

“Fundamentally, we might be able to create a variety of materials with different internal spin characteristics—and perhaps we already have,” said Broholm. “We have created many magnetic structures as a community that we do not fully comprehend. We may finally be able to understand and use such exotic magnetic structures now that we have seen the unique properties of Weyl-mediated magnetism.”