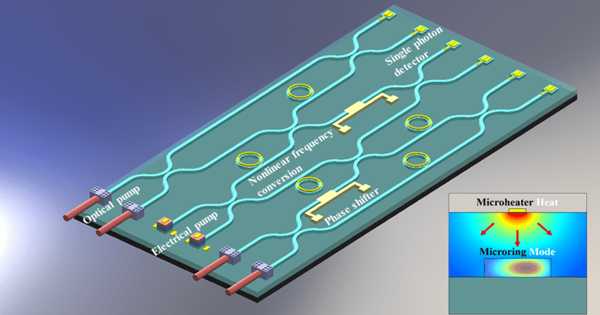 A New Integrated Photonics Platform has been Developed

Individual defects can be entangled using photon-photon interactions, providing a path toward large-scale quantum photonic networks. Optically-addressable solid-state spin defects are promising candidates for storing and manipulating quantum information due to their long coherence ground state manifold. Because it has promising optically-addressable spin defects and can be processed into SiC-on-insulator for scalable, integrated photonics, silicon carbide (SiC) is well-suited to bridge the classical-quantum photonics gap.

For more than a decade, SiC photonics has been developed; one of the major challenges has been the difficulty in fabricating ultralow optical loss SiC thin films. Chinese researchers created an ultralow loss 4H-SiCOI platform with a record-high Q factor of 7.1 × 106. Nonlinear photonics processes such as second-, third-, and fourth-harmonic generations, Raman lasing, and Kerr frequency combs were observed. This demonstration marks an important step forward in the development of SiC photonic devices.

Photonic integrated circuits (PICs) and microresonators have piqued the photonics community’s interest. Low optical loss is critical for applications. SiC PICs have been in development for over a decade, with numerous studies on SiC thin films prepared by heteroepitaxial growth. However, due to the high density of crystal defects near the growth interface, the quality factor of these devices is limited to less than 106. Until now, the primary problem for scientists exploring the advantages of SiC in PICs applications has been how to further reduce the optical loss of SiC thin films.

SiC photonics is one of the major obstacles in the difficulty of fabricating ultralow optical loss SiC thin-films. Scientists have fabricated an ultralow loss 4H-SiCOI platform with a record-high-Q factor of 7.1 × 106.

In a new paper published in Light Science & Application, a team of scientists, led by Professor Xin Ou from State Key Laboratory of Functional Materials for Informatics, Shanghai Institute of Microsystem and Information Technology, Chinese Academy of Sciences, and co-workers have fabricated an ultralow loss 4H-SiCOI platform with a record-high-Q factor of 7.1 × 106. The 4H-SiCOI platform prepared by wafer-bonding than thinning techniques enables the same crystalline quality as bulk high-pure 4H-SiC crystal.

The high Q resonators were used to demonstrate a variety of nonlinear processes such as multiple harmonic generations up to the fourth-order, cascaded Raman lasing, and Kerr frequency comb. Broadband frequency conversions have been observed, including second-, third-, and fourth-harmonic generation (SHG, THG, and FHG). For the first time, cascaded Raman lasing with a Raman shift of 204.03 cm-1 has been demonstrated in SiC microresonators. Kerr frequency combs covering the wavelength range of 1300 to 1700 nm have been achieved at a low input power of 13 mW using a dispersion-engineered SiC microresonator.

The demonstration of high Q SiC photonics devices marks an important step forward in the development of SiC PICs. The reviewers also praised this work highly. “This work, in my opinion, is novel, sound, and significant. I believe this work will provide significant momentum for SiC integrated photonics in the coming years,” “I believe this work will be a milestone for SiC photonics,” “The presented work here shows a microresonator with Q up to 7.1 × 106, which is undoubtedly a significant breakthrough in the development of photonic devices that harness the unique optical properties of SiC.”

Despite decades of research, no ideal photonic material appears to exist that can play the unifying role that silicon has been dominantly playing in microelectronics for decades. For example, some photonic materials (such as compound semiconductors) are suitable for laser light generation, whereas others (such as lithium niobate) are suitable for electro-optics (an effect useful for switches and modulators). Silicon is a good passive optical material for moving a light around a chip, and there are ways to make modulators out of it, but the performance of the devices is poor due to the material’s lack of electro-optic properties.

The issue with today’s lithium niobate devices is that they are large and expensive. If thin films of lithium niobate are developed and the geometrical cross-sections of devices on the films can be reduced to submicron dimensions, the field of integrated photonics will be able to move toward a more unifying platform. Furthermore, if such miniaturized photonic devices are built on silicon wafers that already contain electronic circuits, ultrafast photonics and electronics can be seamlessly integrated. A hybrid platform like this could pave the way for future personal computers, game consoles, laptops, and tablets to use optics to transmit data between microprocessors, graphics, and memory chips.