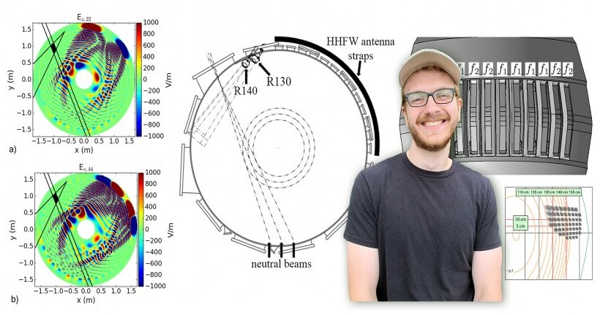 Fusion reactions are the primary source of energy in stars. This energy is emitted into space by stars as electromagnetic radiation, which includes visible light, heat, ultraviolet light, and radio waves. The frequency of radio waves ranges from about 3,000 cycles per second, or 3 kilohertz, to about 300 billion hertz, or 300 gigahertz.

The potential breakthrough, led by researchers at the U.S. Department of Energy’s (DOE) Princeton Plasma Physics Laboratory (PPPL), could pave the way for follow-up experiments on the National Spherical Tokamak Experiment-Upgrade (NSTX-U), PPPL’s flagship fusion experiment that is currently being repaired, as well as other fusion facilities around the world. “If our method works, it will be a very useful tool for many fusion reactors,” said Grant Rutherford, a first-year graduate student at MIT and lead author of a paper published in the Review of Scientific Instruments as a Brown University DOE Science Undergraduate Laboratory Intern at PPPL.

Scientists seeking to bring to Earth the fusion energy that drives the sun and stars use radio frequency (RF) waves—the same waves that bring radio and television into homes—to heat and drive current in the plasma that fuels fusion reactions.

However, due to the high frequency of RF waves, the swings occur too quickly to be measured. So the researchers created a “beat wave” by launching two waves at different frequencies, resulting in measurable swings. “If we could both create and measure a beat wave fluctuation, we’d have a new tool for validating predictions for RF heating and current drive,” Rutherford explained.

Despite the fact that the swings caused by high-frequency rf waves are too fast to measure. As a result, scientists created beat waves by launching two waves of varying frequencies. They were able to produce measurable swings by doing so. “If we could both create and measure a beat wave fluctuation, we would have a new tool for validating predictions for RF heating and current drive,” Rutherford said.

Such measurements would have far-reaching implications. They could, for example, make it easier to study the performance of RF wave actuators, according to PPPL physicist Nicola Bertelli, a co-author of the paper, and they could allow validation of RF calculation tools developed throughout the fusion community. Furthermore, according to David Smith, a physicist at the University of Wisconsin and co-author of the paper, “our calculations provide an initial assessment of the technique and motivate follow-up experiments on NSTX-U.”

Fusion reactions combine light elements in the form of plasma—the hot, charged state of matter composed of free electrons and atomic nuclei that accounts for 99 percent of the visible universe—to produce massive amounts of energy. Replicating and controlling this process on Earth would result in an almost infinite supply of safe and clean power to generate electricity. Fusion could play a significant role in the United States’ transition away from fossil fuels and toward a low-carbon source of electrical generation.

Rutherford and colleagues put their technique to the test by developing a simulated version of a 2D beam emission spectroscopy (BES) diagnostic to assess simulated RF injections into the plasma. Their goal was to better understand and measure the RF field waves that cause the swings.

In the future, “We’re hoping that by improving our measurement capabilities, we’ll be able to better understand heating and current drive processes,” Rutherford explained. Such research could also reveal whether the BES diagnostic on which the scientists based their model is capable of measuring density swings in actual fusion plasmas, or whether another diagnostic would do a better job.