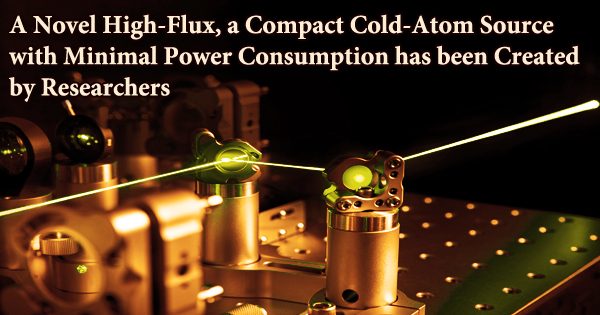 A Novel High-Flux, a Compact Cold-Atom Source with Minimal Power Consumption has been Created by Researchers

Cold-atom quantum technology is rapidly being reinvented as practical gadgets that may be used in real-world situations. In applications such as timekeeping, gravimetry, and navigational inertial sensing, these precision measuring equipment outperform traditional approaches by a substantial margin. Compact cold-atom devices are also being created for gravity mapping, navigation, and communications experiments in space, as well as basic physics studies in general relativity, dark matter, and gravitational waves.

Although quantum technology has proved useful for extremely accurate timekeeping, making these technologies feasible for usage in a range of situations remains a major issue. Researchers have discovered a novel high-flux and small cold-atom source with low power consumption that might be a fundamental component of several quantum technologies, marking a significant step toward portable quantum devices. In contrast to single-chamber cold-atom systems, where atoms are generated directly at the measurement position, this allows both a low background pressure and a large atomic population for the measurement. This necessitates a trade-off between low pressure for the measurement and high pressure for fast atom generation.

According to study team leader Christopher Foot of Oxford University in the United Kingdom, “the use of quantum technologies based on laser-cooled atoms has already led to the development of atomic clocks that are used for timekeeping on a national level.” “Precise clocks have many applications in the synchronization of electronic communications and navigation systems such as GPS. Because local clocks can maintain accurate timekeeping even if the network is disrupted, compact atomic clocks that can be deployed more widely, even in space, provide resilience in communications networks.”

S. Ravenhall, B. Yuen, and Foot discuss work done at Oxford, U.K., to demonstrate an entirely new design for a cold atom source in The Optical Society (OSA) journal Optics Express. The novel gadget may be used with a variety of cold-atom technologies.

“In this project, we took a design we made for research purposes and developed it into a compact device,” said Foot. “Compact cold-atom devices can be used for equipment for gravity mapping, inertial navigation, and communications, as well as to study physical phenomena in research applications such as dark matter and gravitational waves, in addition to timekeeping.”

Laser light may be used to chill atoms to extremely low temperatures by applying a force that slows them down, which may seem paradoxical. This method may be used to make a cold-atom source, which emits a beam of laser-cooled atoms that is directed at an area where precise measurements, such as timekeeping or detecting gravitational waves, are performed.

In order to beam light on atoms in a vacuum from all directions, laser cooling generally necessitates a complex array of mirrors. The researchers devised an entirely new setup that only employs four mirrors in their current study. These mirrors are stacked in a pyramid shape and positioned in such a manner that they glide past each other like flower petals, creating a hole at the top of the pyramid through which the cold atoms are forced out.

For varied applications, the size of this hole may be changed to improve the flow of cold atoms. The pyramid structure reflects light from a single incoming laser beam that enters the vacuum chamber through a single viewport, making the optics simpler. Polishing metal and adding a dielectric coating were used to make the mirrors, which are positioned inside the vacuum area of the cold-atom source.

“The adjustability of this design is an entirely new feature,” said Foot. “The construction is simplified by making a pyramid out of four similar polished metal pieces, and it may be used without the adjustment mechanism.”

The researchers built laboratory equipment to properly quantify the flow of atoms released via a hole at the top of the pyramid to test their innovative cold-atom source design.

“We demonstrated an exceptionally high flux of rubidium atoms,” said Foot. “The majority of cold-atom devices perform measurements that get better as the number of atoms utilized increases. Sources with a greater flux can thus be utilized to improve measurement accuracy, increase the signal-to-noise ratio, or aid in the attainment of broader measurement bandwidths.”

The news source, according to the researchers, is acceptable for commercial use. Scaling up manufacturing to create numerous copies would be simple due to the minimal number of components and few assembly procedures.