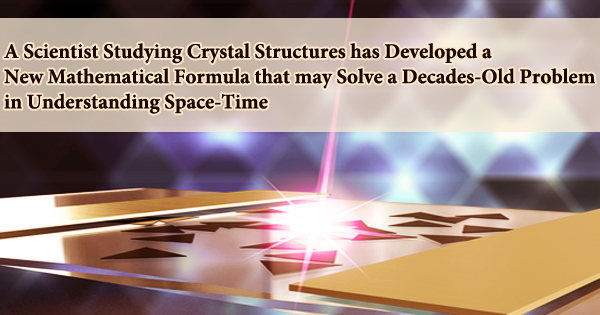 A Penn State crystal structure researcher has devised a new mathematical formula that might help answer a decades-old puzzle about space-time, the fabric of the cosmos postulated by Einstein’s theories of relativity.

“Relativity tells us space and time can mix to form a single entity called spacetime, which is four-dimensional: three space-axes and one time-axis,” said Venkatraman Gopalan, professor of materials science and engineering and physics at Penn State.

The time-axis, on the other hand, stands out like a sore thumb. A crystal is a collection of atoms organized in a 3D space in a repeating (periodic) pattern. Liquids must occupy a volume of space homogeneously before they may crystallize, similar to how water in a full cup will be the same everywhere within the cup.

When water crystallizes in this symmetrical manner, its atoms create hard structures that repeat like a pattern. This symmetry, however, is not omnidirectional; the patterns only repeat in some, not all, directions. In order for relativistic calculations to function, scientists must use a negative sign on time values that they do not have to use on space values.

Although physicists have learnt to cope with negative values, spacetime cannot be viewed using standard Euclidean geometry and must instead be viewed using the more complicated hyperbolic geometry. Gopalan devised a two-step mathematical method that blurs the distinctions between space and time, eliminating the negative sign problem and acting as a link between the two geometries.

“For more than 100 years, there has been an effort to put space and time on the same footing,” Gopalan said. “However, this has not occurred as a result of the negative sign. At least under special relativity, this discovery solves the problem. In this piece, space and time are genuinely on the same footing.” The study is followed with a commentary in which two physicists suggest that Gopalan’s method may hold the key to integrating quantum mechanics and gravity, two basic disciplines of physics that have yet to be fully united.

“Gopalan’s idea of general relativistic spacetime crystals and how to obtain them is both powerful and broad,” said Martin Bojowald, professor of physics at Penn State. “In part, this research provides a novel solution to a physics issue that has been unsolved for decades.”

The study has implications for building novel materials with unusual characteristics, known as spacetime crystals, in addition to giving a new method to link spacetime to classical geometry.

In recent years, scientists have looked into the notion of time crystals, in which the state of material changes and repeats in time, much like a dance. In those formulations, however, time is separated from space. Gopalan’s technique would allow researchers to investigate a new class of spacetime crystals in which space and time can mingle.

“These possibilities could usher in an entirely new class of meta materials with exotic properties otherwise not available in nature, besides understanding the fundamental attributes of a number of dynamical systems,” said Avadh Saxena, a physicist at Los Alamos National Laboratory.

The approach used by Gopalan includes combining two distinct observations of the same occurrence. When two observers share time coordinates but maintain their own spatial coordinates, this is known as blending. This results in “renormalized blended space-time” after an extra mathematical step called renormalization.