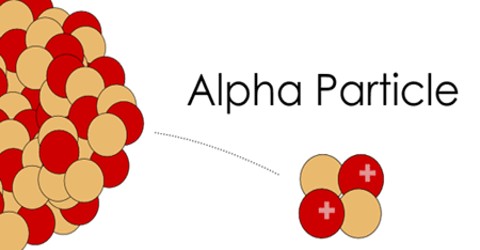 Alpha Particle is a helium nucleus. It consists of the nucleus of an atom of helium, two protons and two neutrons and is sometimes emitted from the nucleus of some atoms as part of those atoms’ radioactive decay. Alpha Particles have an energy range of 4-8 MeV. This energy is dissipated in only a few centimeters of air or less than 0.005mm of aluminum (Al).

Alpha particles, like helium nuclei, have a net spin of zero. Due to the mechanism of their production in standard alpha radioactive decay, alpha particles generally have a kinetic energy of about 5 MeV, and a velocity in the vicinity of 5% the speed of light. They are a highly ionizing form of particle radiation, and when resulting from radioactive alpha decay have low penetration depth. They are able to be stopped by a few centimeters of air, or by the skin. However, so-called long range alpha particles from ternary fission are three times as energetic, and penetrate three times as far. As noted, the helium nuclei that form 10–12% of cosmic rays are also usually of much higher energy than those produced by nuclear decay processes, and are thus capable of being highly penetrating and able to traverse the human body and also many meters of dense solid shielding, depending on their energy. It is an average of about 20 times more dangerous, and in experiments with inhaled alpha emitter up to 1000 times more dangerous, than an equivalent activity of beta emitting or gamma emitting radioisotopes. The rest mass of the Alpha Particle amounts to 6.64424·10-27 kg, or 3.7273·109 eV. Alpha radiation is the radiation with the lowest penetration potential of the three radiation types (alpha, beta, gamma radiation). Alpha radiation can already be stopped by a sheet of paper and is only dangerous for living creatures if the substance emitting alpha rays is inhaled or ingested with food or enters wounds.

Interaction of Alpha Particles with Matter

Alpha Particles interact with matter primarily through coulomb forces between their positive charge and the negative charge of the electrons from atomic orbitals. In general, the alpha particles transfer energy mostly by: Creation of pairs requires energy, which is lost from the kinetic energy of the alpha particle causing it to decelerate. The positive ions and free electrons created by the passage of the alpha particle will then reunite, releasing energy in the form of heat. There are considerable differences in the ways of energy loss and scattering between the passage of light charged particles such as positrons and electrons and heavy charged particles such as fission fragments, alpha particles, muons. Most of these differences are based on the different dynamics of the collision process. In general, when a heavy particle collides with a much lighter particle (electrons in the atomic orbitals), the laws of energy and momentum conservation predict that only a small fraction of the massive particle’s energy can be transferred to the less massive particle. Alpha Decay – The best-known source of Alpha Particles is alpha decay of heavier atoms. When an atom emits an alpha particle in alpha decay, the atom’s mass number decreases by four due to the loss of the four nucleons in the alpha particle.

Ternary Fission – Especially energetic Alpha Particles deriving from a nuclear process are produced in the relatively rare nuclear fission process of ternary fission. In this process, three charged particles are produced from the event instead of the normal two, with the smallest of the charged particles most probably (90% probability) being an alpha particle.

Cosmic Rays – In addition, extremely high energy helium nuclei sometimes referred to as alpha particles make up about 10 to 12% of cosmic rays. The mechanisms of cosmic ray production continue to be debated.

Solar Core Reactions – As noted, helium nuclei may participate in nuclear reactions in stars, and occasionally and historically these have been referred to as alpha reactions.

Accelerators – Energetic helium nuclei may be produced by cyclotrons, synchrotrons, and other particle accelerators, but they are not normally referred to as “alpha particles.” The specific aims are to characterize the cellular effects of alpha-particles, to determine the normal tissue toxicity and to evaluate the effect on tumor growth. Three areas are of special interest: