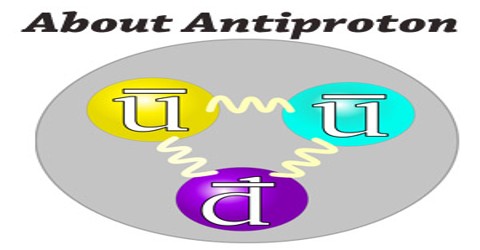 Antiproton is actually stable but still of short life as any collision with proton means destruction of both with sudden burst of energy. It is also called negatron. Antiprotons were first produced and identified in 1955 by Emilio Segrè, Owen Chamberlain, for which they received the Nobel Prize for Physics in 1959 and coworkers by bombarding a copper target with high-energy protons from the proton synchrotron at the University of California at Berkeley. Antiprotons were predicted in the early 1930s, but their discovery had to wait for the technology of high-energy particle accelerators to reach the 6 billion electron-volt range. The field of particle physics discovered and used antimatter during its trail of discovery. To date antiprotons have also been used as probes to discover the internal structure of nuclei, and will hopefully be used soon for atomic physics and grand unified theory (GUT) tests. Perhaps antihydrogen will be used to verify that the gravitation force between matter and antimatter is repulsive, and not attractive. In spite of the popular perception of the availability of antiprotons, as in Dan Brown’s bestseller “Angels and Daemons”, it must be mentioned that the production of antiprotons is very cumbersome. Currently, only the European Organization for Nuclear Research (CERN) at Geneva can provide a beam of antiprotons with low enough energy. A 26 GeV proton beam from the proton synchrotron (PS) is dumped into an iridium target. For each spill, a few antiprotons are produced, which then are being collected and cooled at the antiproton decelerator (AD). The energy is reduced to almost 50 MeV, giving a spill of 3e7 antiprotons every 90 seconds. Antiprotons have been shown within laboratory experiments to have the potential to treat certain cancers, in a similar method currently used for ion (proton) therapy. The primary difference between antiproton therapy and proton therapy is that following ion energy deposition the antiproton annihilates depositing additional energy in the cancerous region.

The key to antiproton therapy is the production of this recoil heavy ion. The ion will be produced with several MeV of kinetic energy and will have a charge state of several electron charges. As the ion transverses the cells in the tumor, it will lose energy to the surrounding atoms, producing a path of highly ionized ions and free radicals in the cell. These free radicals can migrate and chemically react with the DNA molecules causing them to break. A beam of antiprotons behave like ordinary protons at high velocities when they enter tissue. But as the antiprotons are being stopped at the end of the particle trajectory, the negatively charged particles will be captured by the nucleus and quickly spiral towards the nucleus where it will annihilate on the surface. The energy released hereby equals almost 1.9 GeV. A. H. Sullivan measured the first depth dose curve of the antiprotons hitting a polyethylene target. This makes the antiproton an interesting new candidate for radiation therapy: the extra energy is deposited where one needs it, namely at the Bragg peak. Additionally, the recoiling fragments will contribute with an increased Relative Biological Eficiency (RBE) around the annihilation region. At the same time, the radiobiology in the plateau region is known, as the antiprotons here almost entirely behave as protons.

The antiproton cosmic ray energy spectrum is now measured reliably and is consistent with this standard picture of antiproton production by cosmic ray collisions. These experimental measurements set upper limits on the number of antiprotons that could be produced in exotic ways, such as from annihilation of super symmetric dark matter particles in the galaxy or from the Hawking radiation caused by the evaporation of primordial black holes.