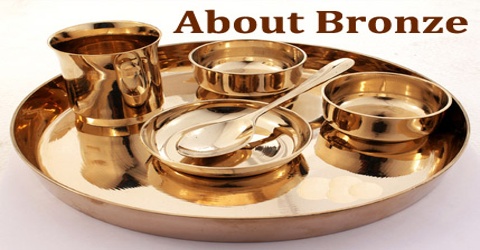 Bronze is a yellow or brown alloy of copper and tin, sometimes with small amounts of other metals such as lead or zinc. Compositions vary, but most modern bronze is 88% copper and 12% tin. Bronze is harder than brass and is used both in industry and in art. It is one of the earliest metals known to man. Copper alloys generally are called brass, with bronze sometimes considered a type of brass. To avoid confusion, museums and historical texts typically use the inclusive term “copper alloy.” In science and engineering, bronze and brass are defined according to their element composition.

Bronze “ore” can occur naturally, where, for example, natural deposits of copper and tin occur together – but this is very rare. Historically, bronze could only be made when trade allowed for an exchange of copper and tin metals or ores.

The archeological period where bronze was the hardest metal in widespread use is known as the Bronze Age. The Bronze Age was followed by the Iron Age starting from about 1300 BC and reaching most of Eurasia by about 500 BC, though bronze continued to be much more widely used than it is in modern times. Production and Properties of Bronze

Copper is made from copper ore by a process known as smelting – heating the ore to a very high temperature, and removing impurities. Other alloy components can also be added to the molten copper at this time, where they melt and combine with the molten copper. In modern times, this is done with extreme precision, to ensure the consistency of bronzes, as even small variations in the “recipe” of alloys can result in very different physical, casting, and aesthetic qualities. Bronze usually is a golden hard, brittle metal. The properties depend on the specific composition of the alloy as well as how it has been processed. Many bronze alloys display the unusual property of expanding a small amount when solidifying from a liquid into a solid. For sculpture casting, this is desirable, as it helps to fill a mold.

Upon exposure to air, bronze oxidizes, but only on its outer layer. This patina consists of copper oxide, which eventually becomes copper carbonate. The oxide layer protects the interior metal from further corrosion. However, if chlorides are present, copper chlorides form, which can cause “bronze disease”, a condition in which corrosion works through the metal and destroys it.

Unlike steel, striking bronze against a hard surface won’t generate sparks. This makes bronze useful for metal used around flammable or explosive materials. Bronze is used in architecture for structural and design elements, for bearings because of its friction properties, and as phosphor bronze in musical instruments, electrical contacts, and ship propellers. Aluminum bronze is used to make machine tools and some bearings. Bronze wool is used instead of steel wool in woodworking because it doesn’t discolor oak.

It has been used to make coins. Most “copper” coins are actually bronze, consisting of copper with 4% tin and 1% zinc. Bronze statues were regarded as the highest form of sculpture in Ancient Greek art, though survivals are few, as bronze was a valuable material in short supply in the Late Antique and medieval periods. Many of the most famous Greek bronze sculptures are known through Roman copies in marble, which were more likely to survive.

Bronze is the preferred metal for bells, in the form of a high tin bronze alloy known colloquially as bell metal, which is about 23% tin. It is also used for the windings of steel and nylon strings of various stringed instruments such as the double bass, piano, harpsichord, and the guitar. Bronze strings are commonly reserved on pianoforte for the lower pitch tones; as they possess a superior sustain quality to that of high-tensile steel.