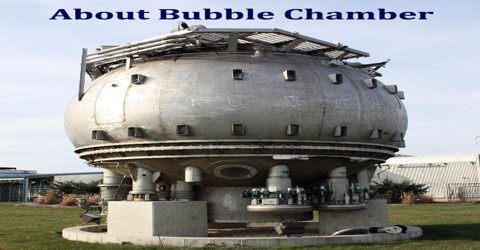 Bubble Chamber is a chamber of superheated liquid in which the path of an ionizing particle is made visible by a string of vapor bubbles. It is designed to detect charged particles through the tracks of bubbles present in a chamber consisting of liquefied gas or liquid hydrogen. It was invented by Donald Glaser in 1952. This bubble chamber consists of a sealed cavity that is filled with a liquefied gas in order to reduce the inside pressure. Liquid hydrogen and helium are the most commonly used liquids in the bubble chambers, and a controlled device to maintain these gases in their liquid state. For applications requiring very dense liquids, a variety of organic compounds can be used.

Cloud chambers work on the same principles as bubble chambers, but are based on supersaturated vapor rather than superheated liquid. While bubble chambers were extensively used in the past, they have now mostly been supplanted by wire chambers and spark chambers. Historically, notable bubble chambers include the Big European Bubble Chamber (BEBC) and Gargamelle. The Bubble Chamber works as follows:

Bubble Chambers now in operation are rectangular or cylindrical in shape, range in sensitive volume from a few cubic centimeters to ten liters or more, and operate with various liquids including hydrogen, helium, xenon, diethyl ether, propane and solutions containing more than one component. The bubble chamber is useful for analyzing high-energy particles. It is also used for precisely measuring rare decays with extremely short lifetimes. When the particles of liquid hydrogen enter the chamber, a piston immediately reduces the pressure inside this cavity, which in turn lowers the boiling point of liquid, leaving the liquid heated at the appropriate temperature.

When a charged particle passes via this heated liquid, it creates tiny gas bubbles. The size of the bubbles increases as the chamber expands, so that the bubbles can be illuminated and photographed. In the presence of a magnetic field, the charged particles travel along a curved path, and the degree of curvature is dependent on the charge, speed and mass of the particle. Some of the major drawbacks of a bubble chamber include the following:

The key benefits of a bubble chamber include: