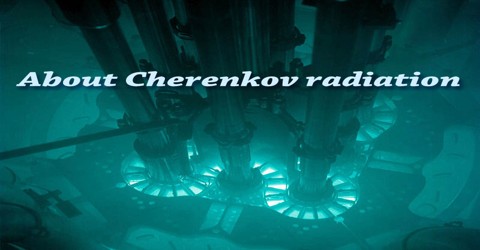 Cherenkov radiation is named after the Russian physicist who first worked it out in detail, in 1934, Pavel Alekseyevich Cherenkov, he got a Nobel for his work, in 1958, and it’s also sometimes called Cerenkov radiation. It is electromagnetic radiation emitted when a charged particle (such as an electron) passes through a dielectric medium at a speed greater than the phase velocity of light in that medium. Cherenkov radiation, when it is intense, appears as a weak bluish white glow in the pools of water shielding some nuclear reactors. The Cherenkov radiation in cases such as this is caused by electrons from the reactor traveling at speeds greater than the speed of light in water, which is 75 percent of the speed of light in a vacuum. The energetic charged particle traveling through the medium displaces electrons in some of the atoms along its path. The electromagnetic radiation that is emitted by the displaced atomic electrons combines to form a strong electromagnetic wave analogous to the bow wave caused by a power boat traveling faster than the speed of water waves or to the shock wave (sonic boom) produced by an airplane traveling faster than the speed of sound in air.

The radiation of Cerenkov light occurs when a charged particle moves through a dispersive medium faster than the speed of light in that medium. A dispersive medium is one whose index of refraction is an increasing function of photon energy. Two things happen when such a particle slows down: According to classical physics, a moving charged particle emits electromagnetic waves. In a quantum mechanical picture, when a charged particle moves inside a polarizable medium with molecules, it excites the molecules to the higher levels and excited states. Upon returning back to their ground state, the molecules re-emit some photons in the form of electromagnetic radiation. According to the Huygens principle, the emitted waves move out spherically at the phase velocity of the medium. If the particle motion is slow, the radiated waves bunch up slightly in the direction of motion, but they do not cross. However if the particle moves faster than the light speed, the emitted waves add up constructively leading to a coherent radiation at angle θ with respect to the particle direction, known as Cherenkov radiation. The signature of the effect is a cone of emission in the direction of particle motion. In particle physics, the Cherenkov radiation is used frequently in particle identification detectors (PID). Particle identification plays a crucial role in particle physics to separate particles such as protons, electrons, muons, pions, etc at different velocities. Cherenkov counters can be categorized to two main types: threshold and imaging counters. Based on the radiated angle equation, if the particle velocity exceeds 1/n, then photons would be generated. This can be set as a threshold measurement mechanism through which the number of particles at given velocity would be determined. By varying the pressure of the gas in a detector, the number of particles passing the threshold velocity changes. Correlating this change to the gas pressure can be used for particle identification. This effect gives a comparative study of the particle speed compared to the phase velocity of light in the medium. Simply by observing the existence of the Cherenkov radiation from a particle, one can determine its relative velocity with respect to the light speed in medium. Knowing that, one can determine the particle momentum. In β-ray detectors one can use a magnet to determine the momentum and direction of motion for a charged particle. Employing the Cherenkov detectors the characterization can be extended to the angular distribution measurement of the scattered particles.

Cherenkov radiation is commonly used in experimental particle physics for particle identification. One could measure or put limits on the velocity of an electrically charged elementary particle by the properties of the Cherenkov light it emits in a certain medium. If the momentum of the particle is measured independently, one could compute the mass of the particle by its momentum and velocity, and hence identify the particle. It is used to detect high-energy charged particles. In pool-type nuclear reactors, beta particles (high-energy electrons) are released as the fission products decay. The glow continues after the chain reaction stops, dimming as the shorter-lived products decay. Similarly, Cherenkov radiation can characterize the remaining radioactivity of spent fuel rods.

It is widely used to facilitate the detection of small amounts and low concentrations of biomolecules. Radioactive atoms such as phosphorus-32 are readily introduced into biomolecules by enzymatic and synthetic means and subsequently may be easily detected in small quantities for the purpose of elucidating biological pathways and in characterizing the interaction of biological molecules such as affinity constants and dissociation rates.