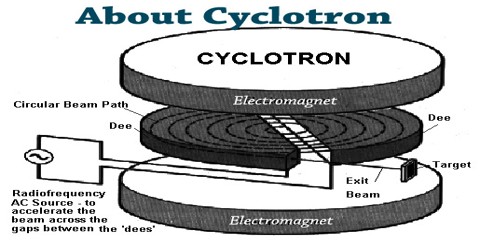 Cyclotron is a type of particle accelerator that uses a constant magnetic field to hold charged particles in a circular spiral pattern. The first cyclotron was invested at the University of California, Berkeley, in 1932, by Ernest Lawrence in collaboration with his student M. Stanley Livingston. This work earned Lawrence the 1939 Nobel Prize in Physics. The largest single-magnet cyclotron was the 4.67 m (184 in) synchrocyclotron built between 1940 and 1946 by Lawrence at the University of California at Berkeley, which could accelerate protons to 730 MeV. The largest cyclotron is the 17.1 m (56 ft) multimagnet TRIUMF accelerator at the University of British Columbia in Vancouver, British Columbia which can produce 500 MeV protons. There are over 1200 cyclotrons used in nuclear medicine worldwide for the production of radionuclides. The first European cyclotron was constructed in Leningrad in the physics department of the Radium Institute, headed by Vitaly Khlopin (ru). This Leningrad instrument was first proposed in 1932 by George Gamow and Lev Mysovskii (ru) and was installed and became operative by 1937. In Nazi Germany a cyclotron was built in Heidelberg under supervision of Walther Bothe and Wolfgang Gentner, with support from the Heereswaffenamt, and became operative in 1943.

A cyclotron is capable of generating particle energies between a few million and several tens of millions of electron volts. A particle accelerator that imparts energies of several million electron-volts to rapidly moving particles; it is used in investigations in nuclear physics and particle physics. An early particle accelerator in which charged particles were generated at a central source and accelerated spirally outward through a fixed magnetic and alternating electric fields. For several decades, these were the best sources of high-energy beams for nuclear physics experiments. However, these are still in use for this type of research. The charged particle (a positively charged proton) is released near midpoint of the face of one of the Dees. Being in the electric field from one Dee to another, it is accelerated by the electric force in the direction of electric field. As the particle enters the adjoining Dee, the magnetic force, being perpendicular to it, renders the charged particle to move along a semicircular path within the Dee.   By the time, it emerges again in the narrow gap separating the two Dees, the electrical polarity of the Dees changes so that the particle is again accelerated again with an increase in speed. Advantages and Limitations of Cyclotron

The cyclotron provides many options for drug development teams in all phases of development. Cyclotron availability allows for advanced, short-lived, labeled drug candidates, and probes of drug function. The center also provides sophisticated informatics to optimize the interpretation of data generated through the use of these technologies, significantly enhancing the power of molecular imaging in driving key decisions along the development path.

The cyclotron was an improvement over the linear accelerators (linacs) that were available when it was invented, being more cost- and space-effective due to the iterated interaction of the particles with the accelerating field. In the 1920s, it was not possible to generate the high power, high-frequency radio waves which are used in modern linacs. As such, impractically long linac structures were required for higher-energy particles. The compactness of the cyclotron reduces other costs as well, such as foundations, radiation shielding, and the enclosing building. The spiral path of the cyclotron beam can only “sync up” with klystron-type (constant frequency) voltage sources if the accelerated particles are approximately obeying Newton’s Laws of Motion. The classical cyclotron is therefore only capable of accelerating particles up to a few percent of the speed of light. To accommodate increased mass the magnetic field may be modified by appropriately shaping the pole pieces as in the isochronous cyclotrons, operating in a pulsed mode and changing the frequency applied to the dees as in the synchrocyclotrons, either of which is limited by the diminishing cost effectiveness of making larger machines.

The largest cyclotron is the TRIUMF 500 MeV Cyclotron, which is still in operation at the University of British Columbia in Vancouver, British Columbia, Canada, and certainly modern accelerator designs, such as those in place at the Large Hadron Collider, can far surpass this energy level.