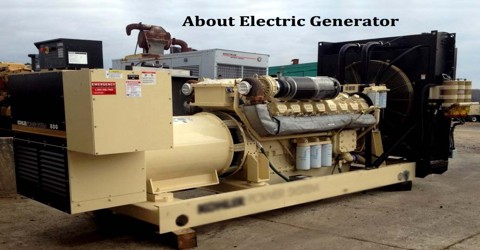 The mechanical power for an electric generator is usually obtained from a rotating shaft and is equal to the shaft torque multiplied by the rotational, or angular, velocity. The construction and the speed of the generator may vary considerably depending on the characteristics of the mechanical prime mover.

Generators are usually work on Faraday’s law of Electro Magnetic induction. This law explains that by rotating an electric conductor in a magnetic field, an emf is induced, which creates a flow of charges. When the conductor rotates in the magnetic field, a voltage difference is created between its two ends and the flux in it changes and an emf is induced which is proportional to the rate of change of flux (e=-N dΦ/dt) and hence the current flows. The electric conductor rotating is called the armature of the generator.

Structure and Function of Electric Generator

The electric generator works in the opposite way of an electric motor. It converts mechanical work into electrical energy. The principle of working off a generator is such that flow of electric charges can be induced by moving an electrical conductor in a magnetic field. Moving the conductor in the magnetic field produces a voltage difference between the two ends of the wire (electrical conductor), thus producing an induced current. The main components of an electric generator are given below: There are five major types of electric generators, classified according to the manner in which their field flux is produced:

Separately Excited Generator: In a separately excited generator, the field flux is derived from a separate power source independent of the generator itself.

Commutatively Compound Generator: In commutatively compounded generator, both a shunt and a series field are present and their efforts are additive. It can also be further divided into two categories: Electric generators are typically used for backup power, but can be used for powering tools on a job site, while camping or tailgating or for off-grid purposes where there may be no incoming utility power. Some common uses are: