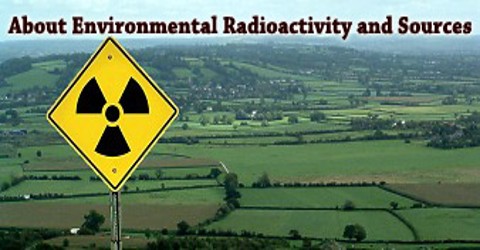 About Environmental Radioactivity and Sources

About Environmental Radioactivity and Sources

Environmental Radiation is a termed of “Background Radiation.” It is produced by radioactive materials in the human environment. While some radioisotopes, such as strontium-90 (90Sr) and technetium-99 (99Tc), are only found on Earth as a result of human activity, and some, like potassium-40 (40K), are only present due to natural processes, a few isotopes, e.g. tritium (3H), result from both natural processes and human activities. The concentration and location of some natural isotopes, particularly uranium-238 (238U), can be affected by human activity. Radiation has always been a natural part of our environment. Natural radioactive sources in the soil, water and air contribute to our exposure to ionizing radiation, as well as man-made sources resulting from mining and use of naturally radioactive materials in power generation, nuclear medicine, and consumer products, military and industrial applications.

Our environmental surroundings contain numerous radioactive materials, which may be due to natural processes or may result from human activities, such as the explosions of nuclear weapons undertaken during the middle part of the 20th century.

In most cases the health effects of anthropogenic (human-derived) radioactive materials are very small, nevertheless it is important to fully understand the origins, behaviour and potential impacts of all types of radioactivity in our environment. Cosmic Radiation – The sun and stars send a constant stream of cosmic radiation to Earth, much like a steady drizzle of rain. Differences in elevation, atmospheric conditions, and the Earth’s magnetic field can change the amount (or dose) of cosmic radiation that we receive.

Terrestrial Radiation – The Earth itself is a source of terrestrial radiation. Radioactive materials, including uranium, thorium, and radium exist naturally in soil and rock. Essentially all air contains radon, which is responsible for most of the dose that Americans receive each year from natural background sources. In addition, water contains small amounts of dissolved uranium and thorium, and all organic matter both plant and animal contains radioactive carbon and potassium. Some of these materials are ingested with food and water, while others, such as radon are inhaled. The dose from terrestrial sources varies in different parts of the world, but locations with higher soil concentrations of uranium and thorium generally have higher doses.

Internal Radiation – All people have internal radiation, mainly from radioactive potassium-40 and carbon-14 inside their bodies from birth and, therefore, are sources of exposure to others. The variation in dose from one person to another is not as great as that associated with cosmic and terrestrial sources. The additional radioactivity in the biosphere caused by human activity due to the releases of man-made radioactivity and of Naturally Occurring Radioactive Materials (NORM) can be divided into several classes. The following man-made sources expose the public to radiation the significant radioactive isotopes are indicated in parentheses: Environmental or Background Radioactivity is present everywhere, and has been since the formation of the earth. In one kilogram of soil, the potassium-40 amounts to an average 370 Bq of radiation, with a typical range of 100–700 Bq; the others each contribute some 25 Bq, with typical ranges of 10–50 Bq (7–50 Bq for the Th). Some soils may vary greatly from these norms.

A recent report on the Sava River in Serbia suggests that many of the river silts contain about 100 Bq kg−1 of natural radioisotopes (Ra, Th, and U). It is well known that some plants, called hyperaccumulators, are able to absorb and concentrate metals within their tissues; which suggests that seaweed is an iodine hyperaccumulator. Synthetic radioisotopes also can be detected in silt.