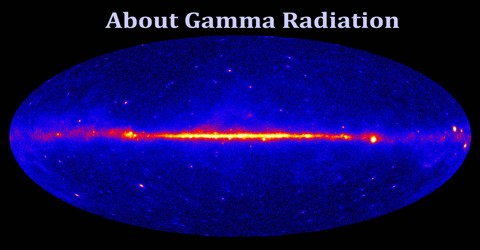 The name ‘gamma rays’ was coined by Earnest Rutherford. Previously, ‘alpha rays’ and ‘beta rays’ had been discovered through the study of radioactivity, named after the first two letters of the Greek alphabet. Paul Villard discovered gamma rays, but thought they were just another form of alpha or beta ray. Earnest Rutherford realized they were a new phenomenon and decided to continue the pattern, naming them gamma rays. Gamma rays are able to ionize other atoms (ionizing radiation), and are thus biologically hazardous. The decay of an atomic nucleus from a high energy state to a lower energy state, a process called gamma decay, produces gamma radiation.

Gamma rays typically have frequencies above 10 exahertz (or >1019 Hz), and therefore have energies above 100 keV and wavelengths less than 10 picometers (10−11 m), which is less than the diameter of an atom. However, this is not a strict definition, but rather only a rule-of-thumb description for natural processes.

When gamma rays are produced from radioactive materials, it is through a process called gamma decay. This is where jiggled-up radioactive atoms are able to release some of their high energy by emitting a gamma ray. Gamma rays can also be produced after lightning strikes and randomly in the atmosphere during thunder storms. A gamma ray is the shortest wavelength and highest energy electromagnetic radiation on the spectrum; it’s at the very top.

A gamma ray begins moving the instant it is created. And it moves at the speed of light, for the medium in which it is traveling. It continues this way until it “runs into something” and “bounces off” in an event we call scattering.

The gamma ray may or may not lose energy in this scattering event. There are different ways it can scatter, but there is also the possibility that this ray, if it has sufficient energy and passes close to an atomic nucleus, will experience what is called pair production. A large chunk of the energy is converted directly in mass to create an electron and a positron, the anti-particle of the electron or antimatter. Gamma rays are sometimes used in Medical treatment to kill of cancer cells, (Chemotherapy.) Also another source of Gamma Rays are unstable elements of the periodic table that give off Electromagnetic Radiation…. such as Uranium,Plutonium and so on.

In particular, gamma radiation is ionizing radiation, meaning that it is sufficiently energetic to break bonds in genetic material, structural components of cells and other biological molecules. For this reason, exposure to gamma radiation can cause a number of health effects, some of which accumulate over time, and others of which are acute. While the body has the ability to repair damage, its ability to repair radiation-related damage can be overwhelmed at high doses or if radiation accumulates over many years. Gamma rays are the most powerful forms of radiation because they can penetrate skin, wood, paper and other matter. They can cause severe damage to organs if ingested, inhaled or absorbed. Mild exposure to gamma rays may result in something small like a skin rash but it is the high doses of exposure that pose the biggest health risk. Low doses of gamma ray exposure are still dangerous, including an increase in cancer, decreased fertility or cataracts. From strong sources to long-term exposure, gamma rays can cause radiation poisoning, which can result in cancer. Heavy doses of gamma ray exposure can result in death within just a few days to a few months. Acute radiation syndrome (ARS) results from long-term exposure to gamma rays and early symptoms include diarrhea, nausea and vomiting. Long-term symptoms of ARS include infection, bleeding, weight loss and marrow depletion. Surviving ARS depends upon the level of exposure to radiation and recovery is a long process, taking years in some cases. Embryos are the most sensitive to gamma ray exposure, and children tend to be more sensitive to exposure than adults.