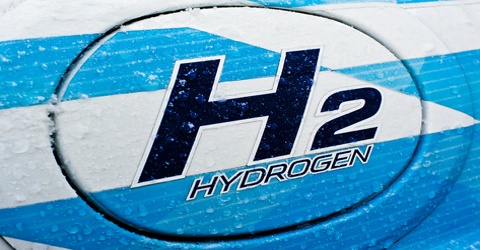 Hydrogen is the lightest and most abundant element in the universe, normally consisting of one proton and one electron. It is a gas, which is used in the production of synthetic ammonia and methanol, in petroleum refining, in the hydrogenation of organic materials, as a reducing atmosphere, in oxy-hydrogen torches, and in rocket fuels. It occurs in water in combination with oxygen, in most organic compounds, and in small amounts in the atmosphere as a gaseous mixture of its three isotopes (protium, deuterium, and tritium) in the colorless, odorless compound H2. The most common isotope of hydrogen, termed protium (name rarely used, symbol 1H), has one proton and no neutrons. The hydrogen atom is formed by a nucleus with one unit of positive charge and one electron. Most commercial hydrogen is reformulated from petroleum (natural gas), but can also be made by passing electricity through water (electrolysis).

Hydrogen atoms are relatively electropositive and form hydrogen bonds with electronegative atoms. In the Sun and other stars, the conversion of hydrogen into helium by nuclear fusion produces heat and light. It is used to make rocket fuel, synthetic ammonia, and methanol, to hydrogenate fats and oils, and to refine petroleum. Hydrogen can be produced using diverse, domestic resources including fossil fuels, such as natural gas and coal, with carbon sequestration; nuclear energy; and other renewable energy sources, such as biomass, wind, solar, geothermal, and hydro-electric power using a wide range of processes. The most important industrial method for the production of hydrogen is the catalytic steam–hydrocarbon process, in which gaseous or vaporized hydrocarbonsare treated with steam at high pressure over a nickel catalyst at 650°–950° C to produce carbon oxides and hydrogen:

Hydrogen (H2) is produced in chemistry and biology laboratories, often as a by-product of other reactions; in industry for the hydrogenation of unsaturated substrates; and in nature as a means of expelling reducing equivalents in biochemical reactions. It can be prepared in several different ways, but economically the most important processes involve removal of hydrogen from hydrocarbons.

The largest application of hydrogen (H2) is for the processing (“upgrading”) of fossil fuels, and in the production of ammonia. Ammonia is manufactured by the so-called Haber-Bosch process, in which hydrogen and nitrogen react in the presence of a catalyst at pressures around 1,000 atmospheres and temperatures around 500° C: N2 + 3H2 → 2NH3. Large amounts of hydrogen are used in the preparation of methanol by the reaction CO + 2H2 → CH3OH. A fuel cell is a device that combines hydrogen with oxygen from the air in an electrochemical reaction to create electricity, which can power an electric motor and propel a vehicle. Fuel cells are twice as energy-efficient as combustion engines, and the hydrogen used to power them can come from a variety of sources, including renewable energy resources. A hydrogen fuel cell emits only heat and water, without producing any air pollutants or greenhouse gases. Hydrogen has been also used as a primary rocket fuel for combustion with oxygen or fluorine and is favoured as a propellant for nuclear-powered rockets and space vehicles.

Another major application of hydrogen is in the catalytic hydrogenation of organic compounds. Unsaturated vegetable and animal oils and fats are hydrogenated to make margarine and vegetable shortening. Hydrogen is used to reduce aldehydes, fatty acids, and esters to the corresponding alcohols.

In more recent applications, hydrogen is used pure or mixed with nitrogen as a tracer gas for minute leak detection. Applications can be found in the automotive, chemical, power generation, aerospace, and telecommunications industries. Hydrogen is an authorized food additive that allows food package leak testing among other anti-oxidizing properties.