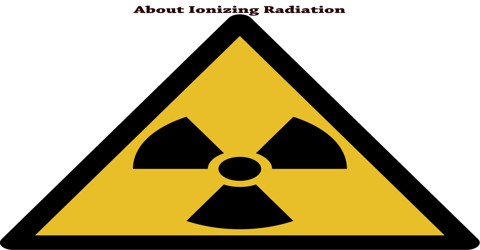 Ionizing Radiation is radiation with enough energy so that during an interaction with an atom, it can remove tightly bound electrons from the orbit of an atom, causing the atom to become charged or ionized. It also called radioactivity, is electromagnetic (EM) radiation whose waves contain energy sufficient to overcome the binding energy of electrons in atoms or molecules, thus creating ions. The wavelength is shorter than that of ultraviolet (UV). It can occur as a barrage of photon s having a nature similar to that of visible light, but with far shorter wavelength and consequently higher frequency. This type of radiation includes X rays and Gamma rays.

Ionizing radiation is invisible and not directly detectable by human senses, so radiation detection instruments such as Geiger counters are required to detect it. However, it can cause emission of visible light upon interaction with matter, such as in Cherenkov radiation and radioluminescence. Ionizing radiation is used in a wide variety of fields such as medicine, research, manufacturing, construction, and many other areas, but presents a health hazard if proper measures against undesired exposure aren’t followed. Exposure to ionizing radiation causes damage to living tissue, and can result in mutation, radiation sickness, cancer, and death.

The most common unit of ionizing radiation is the becquerel (Bq), equal to one disintegration or nuclear transformation per second. Ionizing Radiation is categorized by the nature of the particles or electromagnetic waves that create the ionizing effect. It takes a few forms: Alpha, beta, and neutron particles, and gamma and X-rays. All types are caused by unstable atoms, which have either an excess of energy or mass or both. In order to reach a stable state, they must release that extra energy or mass in the form of radiation. Alpha Radiation: Alpha radiation consists of alpha particles at high energy/speed. The production of alpha particles is termed alpha decay. Alpha particles consist of two protons and two neutrons bound together into a particle identical to a helium nucleus. Alpha particles are relatively large and carry a double positive charge. They are not very penetrating and a piece of paper can stop them. They travel only a few centimeters but deposit all their energies along their short paths. Gamma Radiation: Gamma radiation, unlike alpha or beta, does not consist of any particles, instead consisting of a photon of energy being emitted from an unstable nucleus. Having no mass or charge, gamma radiation can travel much farther through air than alpha or beta, losing half its energy for every 500 feet. Gamma waves can be stopped by a thick or dense enough layer material, with high atomic number materials such as lead or depleted uranium being the most effective form of shielding. X-Rays: X-rays are similar to gamma radiation, with the primary difference being that they originate from the electron cloud. This is generally caused by energy changes in an electron, such as moving from a higher energy level to a lower one, causing the excess energy to be released. X-Rays are longer-wavelength and lower energy than gamma radiation, as well. Neutron Radiation: Neutron radiation consists of free neutrons at any energies/speeds. Neutrons can be emitted by nuclear fission or by the decay of some radioactive atoms. Neutrons have zero electrical charge and cannot directly cause ionization. Neutrons ionize matter only indirectly.

The characteristic of ionizing radiation on human body is that the energy absorbed is low but the biological effects are serious. There are two different types of damaging biological effects due to ionizing radiation on the cellular level. Exposure can cause either cell death, or it can change its genetic information through mutations, leaving the cell able to reproduce itself. In an irradiated population, both of these processes generally work simultaneously, i.e. part of the cells dies and another part is a subject to mutations or malignant transformation. The origin of malignancies lies in changes of the functional parts of chromosomes, the genes. These mutations can originate spontaneously, but the effects of ionizing radiation can significantly increase the number of mutations. Even under normal circumstances, there are about 10^10 spontaneous genome changes during the human lifetime. The final result of the exposure to ionizing radiation is defined by the extent of reparation processes. These processes are able to repair a part of the radiation damage, but the ability to correct mistakes is depends on the time factor. Molecular level or reparation includes enzymatic activity which repairs the damaged DNA structures.