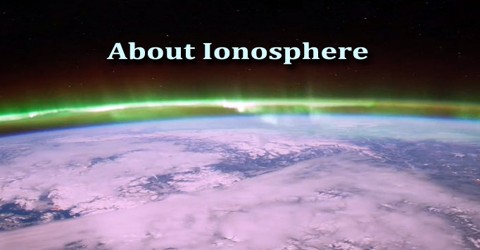 Ionosphere is the part of the earth’s atmosphere beginning at an altitude of about 30 miles (50 kilometers) and extending outward that contains electrically charged particles. It consists of three layers, which all have the same characteristic of high concentrations of ionized particles. These particles are ionized by radiation from the sun. The ionosphere extends from approximately 50 to 250 miles (80 to 400 km) above the earth’s surface. In the ionosphere, the molecules and atoms in the air are ionized mostly by the Sun’s ultraviolet, x-ray, and corpuscular radiation, and partially by cosmic rays, resulting in ions and free electrons. The ionization process depends on many factors such as the Sun’s activity (e.g., sunspot cycles), time (e.g., seasonal or daily changes), or geographical location, different at polar regions, mid-latitudes or equatorial zones.

The ionosphere can be further divided into sub-regions according to their free electron density profile that indicates the degree of ionization, and these sub-regions are called the D, E, and F layers.

It is present at altitudes between about 60 and 90 kilometres and the radiation within it is only present during the day to an extent that affects radio waves noticeably. It is sustained by the radiation from the Sun and levels of ionisation fall rapidly at dusk when the source of radiation is removed.

The D layer is chiefly generated by the action of a form of radiation known as Lyman radiation which has a wavelength of 1215 Angstroms and ionises nitric oxide gas present in the atmosphere. Hard X-Rays also contribute to the ionisation, especially towards the peak of the solar cycle. The D layer or D region mainly has the affect of absorbing or attenuating radio communications signals particularly in the LF and MF portions of the radio spectrum, its affect reducing with frequency. At night it has little effect on most radio communications signals although there is still a sufficient level of ionisation for it to refract VLF signals.

The D region attenuates signals because the radio signals cause the free electrons in the region to vibrate. As they vibrate the electrons collide with molecules, and at each collision there is a small loss of energy. E layer is above the D region. It exists at altitudes between about 100 and 125 kilometres. Instead of attenuating radio communications signals this layer chiefly refracts them, often to a degree where they are returned to earth. As such they appear to have been reflected by this layer. However this layer still acts as an attenuator to a certain degree. The vertical structure of the E layer is primarily determined by the competing effects of ionization and recombination. At night the E layer weakens because the primary source of ionization is no longer present. After sunset an increase in the height of the E layer maximum increases the range to which radio waves can travel by reflection from the layer.

The ionisation in this region results from a number of types of radiation. Soft X-Rays produce much of the ionisation, although extreme ultra-violet (EUV) rays (very short wavelength ultra-violet light) also contribute. Broadly the radiation that produces ionisation in this region has wavelengths between about 10 and 100 Angstroms. The degree to which all of the constituents contribute depends upon the state of the Sun and the latitude at which the observations are made.

The F layer (or region), also known as the Appleton–Barnett layer, extends from about 150 km (93 mi) to more than 500 km (310 mi) above the surface of Earth. During the daytime when radiation is being received from the Sun, it often splits into two: the lower one being the F1 region and the higher one, the F2 region. Of these the F1 region is more of an inflection point in the electron density curve (seen above) and it generally only exists in the summer. The F layer acts as a “reflector” of signals in the HF portion of the radio spectrum enabling world wide radio communications to be established. It is the main region associated with HF signal propagation.

The action of the F layer n radio signals is the same as it is for the E layer, although with the air density being less, there are fewer collisions and les energy is lost. As a result, signals being reflected by the F layer, and in particular the F2 later are subject to low levels of attenuation. As a result, even low power signals can be heard at great distances.