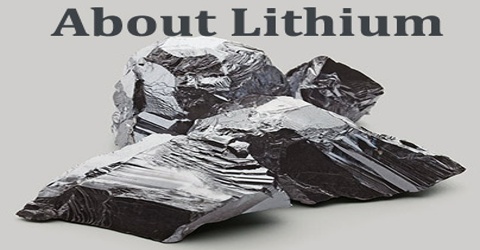 Lithium is a soft, silvery metallic element of the alkali group that occurs in small amounts in some minerals. It is the lightest of all metals and is highly reactive. It is a chemical element with symbol Li and its atomic number 3; atomic weight 6.941; melting point 179°C; boiling point 1,317°C; specific gravity 0.534; valence 1. Like all alkali metals, lithium is highly reactive and flammable, and is stored in mineral oil. Lithium is used to make alloys, batteries, glass for large telescopes, and ceramics. It gets its name from “lithos,” the Greek word for stone, because it is present in trace amounts in virtually all rocks. Lithium works with other elements, drugs, enzymes, hormones, vitamins, and growth factors in the body in many different ways. People use it for medicine.

Production and Properties of Lithium

The first lithium mineral petalite, LiAlSi4O10, was discovered on the Swedish island of Utö by the Brazilian, Jozé Bonifácio de Andralda e Silva in the 1790s. It was observed to give an intense crimson flame when thrown onto a fire. In 1817, Johan August Arfvedson of Stockholm analysed it and deduced it contained a previously unknown metal, which he called lithium. The metal is produced through electrolysis from a mixture of fused 55% lithium chloride and 45% potassium chloride at about 450 °C. The major commercial form is lithium carbonate, Li2CO3, produced from ores or brines by a number of different processes. Addition of hydrochloric acid (HCl) produces lithium chloride, which is the compound used to produce lithium metal by electrolysis. Lithium metal is produced by electrolysis of a fused mixture of lithium and potassium chlorides. It is present in seawater, but commercially viable methods of extraction have yet to be developed. Another potential source of lithium is the leachates of geothermal wells, which are carried to the surface. Recovery of lithium has been demonstrated in the field; the lithium is separated by simple filtration. The process and environmental costs are primarily those of the already-operating well; net environmental impacts may thus be positive.

The pure lithium formed at the cathode coalesces at the surface of the electrolyte to form a molten pool, which is protected from reaction with air by a thin film of the electrolyte. It is ladled from the cell and cast by pouring it into a mold at a temperature only slightly above the melting point, leaving the solidified electrolyte behind. The solidified lithium is then remelted, and materials insoluble in the melt either float to the surface or sink to the bottom of the melt pot. The remelting step reduces the potassium content to less than 100 parts per million. Lithium metal, which can be drawn into wire and rolled into sheets, is softer than lead but harder than the other alkali metals and has the body-centred cubic crystal structure.

As of 2015, most of the world’s lithium production is in South America, where lithium-containing brine is extracted from underground pools and concentrated by solar evaporation. The standard extraction technique is to evaporate water from brine. Each batch takes from 18 to 24 months.

Lithium is used to treat certain psychiatric disorders, especially bipolar disease, the therapeutic level of lithium’the amount needed to treat bipolar disorders’is perilously close to the level that can cause toxicity, so monitoring of blood levels is required. Lithium metal is made into alloys with aluminium and magnesium, improving their strength and making them lighter. A magnesium-lithium alloy is used for armour plating. Aluminium-lithium alloys are used in aircraft, bicycle frames and high-speed trains.

Lithium oxide is used in special glasses and glass ceramics. Lithium chloride is one of the most hygroscopic materials known, and is used in air conditioning and industrial drying systems. Lithium stearate is used as an all-purpose and high-temperature lubricant. Lithium carbonate is used in drugs to treat manic depression, although its action on the brain is still not fully understood. Lithium hydride is used as a means of storing hydrogen for use as a fuel.