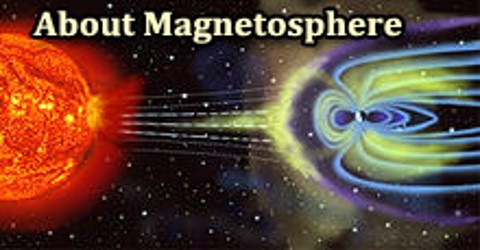 Magnetosphere is the region surrounding a planet, such as the earth, in which the behaviour of charged particles is controlled by the planet’s magnetic field. The magnetic field near the surface of many astronomical objects resembles that of a dipole. The field lines farther away from the surface can be significantly distorted by the flow of electrically conducting plasma emitted from a nearby star. Earth’s magnetosphere is a vast, comet-shaped bubble, which has played a crucial role in our planet’s habitability. Life on Earth initially developed and continues to be sustained under the protection of this magnetic environment. The magnetosphere shields our home planet from solar and cosmic particle radiation, as well as erosion of the atmosphere by the solar wind – the constant flow of charged particles streaming off the sun.

The magnetosphere contains various large-scale regions, which vary in terms of the composition, energies, and densities of the plasmas that occupy them. The sources of the plasmas that populate these regions are the solar wind and the Earth’s ionosphere; the relative contributions of these two sources to the magnetospheric plasma vary according to the level of geomagnetic activity. NASA heliophysics studies the magnetosphere to better understand its role in our space environment. Such research helps unravel the fundamental physics of space, which is dominated by complex electromagnetic interactions unlike what we experience day-to-day on Earth. Structure and Function of Magnetosphere

The Earth’s magnetosphere is a highly dynamic structure that responds quite dramatically to changes in the dynamic pressure of the solar wind and the orientation of the interplanetary magnetic field (IMF). Its ultimate source of energy is the interaction with the solar wind. The principal means by which energy is transferred from the solar wind to the magnetosphere is a process known as “reconnection,” which occurs when the IMF is oriented antiparallel to the orientation of the Earth’s field lines.

The inner magnetosphere extends from the “nose” to a distance of about 8 RE (Earth radii) on the night side, but does not include the region above the poles. This is a relatively stable region, populated by the inner and the outer radiation belt. A typical density of energetic ions is 1 per cubic cm. and the ions are matched by electrons, generally of lower energy. Typical ion energy in the outer radiation belt is 50 keV, and the electric current associated with this plasma is the ring current, circling the Earth.

The plasma sheet is a thick layer of hot plasma centered on the tail’s equator, with a typical thickness 3-7 RE, density 0.3-0.5 ions/cubic cm. and typical ion energy of 2-5 keV. Unlike the inner magnetosphere, this region is rather dynamic: thickness, density and energy vary greatly, and the plasma often flows rapidly in various directions, particularly earthward. In “substorms” some parts of the plasma sheet may get “squeezed out” earthwards and tailwards: earthward-flowing ions gain energy and penetrate the inner magnetosphere, while the outward moving sections (“plasmoids”) stream away from Earth and are lost.

The tail lobes are two regions of relatively smooth magnetic field, north and south of the plasma sheet. Field lines of the lobes are smooth, and maintain roughly the same direction until they converge above the poles. They point towards Earth north of the equator and away from Earth south of it. Other Regions and Particles –

Boundary layers are observed at times just inside the magnetopause, their thickness is generally less than 1 RE. They mark a transition between regions, and their plasma density is intermediate between that of the magnetosphere and the solar wind.

The magnetosphere of Jupiter is the largest planetary magnetosphere in the Solar System, extending up to 7,000,000 kilometers (4,300,000 mi) on the dayside and almost to the orbit of Saturn on the nightside. Jupiter’s magnetosphere is stronger than Earth’s by an order of magnitude, and its magnetic moment is approximately 18,000 times larger. Pluto, on the other hand, has no magnetic field.