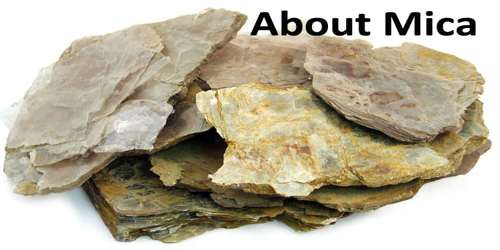 Mica: It is any of a group of hydrous aluminosilicate minerals with the general formula (K,Na,Ca)(Mg,Fe,Li,Al)2-3(Al,Si)4O10(OH,F)2 that can be split easily into thin, partly transparent sheets. The word mica is derived from the Latin word mica, meaning a crumb, and probably influenced by micare, to glitter. Mica is common in igneous and metamorphic rocks and often occurs as flakes or sheets. It is highly resistant to heat and is used in electric fuses and other electrical equipment. Mica forms flat six-sided monoclinic crystals along with an extraordinary split in the direction of larger surfaces. This allows the mineral to be easily cleaved into optically flat films. High in silica, this stone has the extensive capacity to remain elastic and tough even at high temperatures. It is found having thin-sheet like or plate-like structure with various composition and physical properties. This helps the people to handle and work with the stone in those places with high and humid temperatures.

Production and Properties of Mica

Mica was mined in Alabama, Georgia, North Carolina, and South Dakota. Scrap mica was recovered principally from mica and sericite schist and as a byproduct from feldspar, kaolin, and industrial sand beneficiation. The majority of domestic production was processed into small particle-size mica by either wet or dry grinding. Primary uses were joint compound, oil-well-drilling additives, and paint, roofing, and rubber products. Mica is widely distributed and occurs in igneous, metamorphic and sedimentary regimes. Large crystals of mica used for various applications are typically mined from granitic pegmatites. Until the 19th century, large crystals of mica were quite rare and expensive as a result of the limited supply in Europe. However, their price dramatically dropped when large reserves were found and mined in Africa and South America during the early 19th century. The largest documented single crystal of mica (phlogopite) was found in Lacey Mine, Ontario, Canada; it measured 10 × 4.3 × 4.3 m and weighed about 330 tonnes. Similar-sized crystals were also found in Karelia, Russia.

Resources of scrap and flake mica are available in clay deposits, granite, pegmatite, and schist, and are considered more than adequate to meet anticipated world demand in the foreseeable future. World resources of sheet mica have not been formally evaluated because of the sporadic occurrence of this material. Large deposits of mica-bearing rock are known to exist in countries such as Brazil, India, and Madagascar. Limited resources of sheet mica are available in the United States. Domestic resources are uneconomic because of the high cost of hand labor required to mine and process sheet mica from pegmatites. There are a variety of uses of this mineral such as: It is invariably used for fillers, extenders along with providing smoother uniformity, improving workability and prevents cracking. This can be used as an insulator in home attics, concrete blocks and also poured into open top walls. It can also be added to grease to increase its durability and giving it a better surface. Mica can also be used as a soil conditioner particularly in potting soil mixes and in gardening plots.