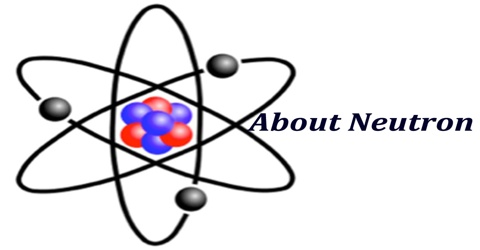 Neutron is an electrically neutral subatomic particle in the baryon family, having a mass of 1.674 × 10-24 grams (1,838 times that of the electron and slightly greater than that of the proton). It is the particle in the atomic nucleus with a mass = 1 and charge = 0. Neutrons are found together with protons in the atomic nucleus. The number of neutrons in an atom determines its isotope. Neutrons are part of the nucleus of all atoms, except hydrogen, and have a mean lifetime of approximately 1.0×10 3seconds as free particles. They consist of a triplet of quarks, including two down quarks and one up quark, bound together by gluons. Most atoms have about the same number of neutrons as protons, but some have more neutrons than protons.

Neutron is essential to the production of nuclear power. In the decade after the neutron was discovered by James Chadwick in 1932, neutrons were used to induce many different types of nuclear transmutations. With the discovery of nuclear fission in 1938, it was quickly realized that, if a fission event produced neutrons, each of these neutrons might cause further fission events, etc., in a cascade known as a nuclear chain reaction.

A neutron has a net neutral electrical charge; it does consist of charged components which cancel each other out with respect to charge. Properties of the Neutron

Neutrons are extremely dense.  If isolated, a single neutron would have a mass of only 1.675? 10-27 kilogram, but if a teaspoonful of tightly packed neutrons could be scooped up; the resulting chunk of matter would weigh millions of tons at the earth’s surface. Neutron is a particle with a spin of one-half. It is the interaction of this spin with the spin state of the nucleus of an atom that determines the scattering property of a neutron with that atom. This spin-spin interaction leads both to coherent scattering, and hence diffraction effects, and to incoherent scattering, which for the purposes of powder neutron diffraction ends up as general background noise in the data.

Neutrons are actually made of even smaller invisible particles, called quarks. Like protons, each neutron is made of three quarks, but neutrons are made of two down quarks and one up quark. A strong nuclear force sticks the quarks together. Although the mass of a proton and a neutron are comparable, especially compared with the much lighter electron, a neutron is slightly more massive than a proton. A neutron has a mass of 1.67492729 x 10-27 kg.

The most commonly used small laboratory sources of neutrons use radioactive decay to power neutron production. One noted neutron-producing radioisotope, californium-252 decays (half-life 2.65 years) by spontaneous fission 3% of the time with production of 3.7 neutrons per fission, and is used alone as a neutron source from this process.

Neutrons also have an important role to play in neutron stars. In a neutron star, there’s so much pressure that the protons and electrons in the star mix together and form neutrons, because adding an electron to a proton makes it into a neutron. So the neutron star is full of neutrons. Because neutrons have neither positive nor negative charge, they don’t push each other apart, and they can pack very closely together, making an extremely dense star. A major use of neutrons is to excite delayed and prompt gamma rays from elements in materials. This forms the basis of neutron activation analysis (NAA) and prompt gamma neutron activation analysis (PGNAA). NAA is most often used to analyze small samples of materials in a nuclear reactor whilst PGNAA is most often used to analyze subterranean rocks around bore holes and industrial bulk materials on conveyor belts.

Medical applications of neutrons began soon after the discovery of this particle in 1932. Neutrons are highly penetrating matter and ionizing, so they can be used in medical therapies such as radiation therapy or boron capture therapy. In particular, knowledge of neutrons and their behavior has been important in the development of nuclear reactors and nuclear weapons. The fissioning of elements like uranium-235 and plutonium-239 is caused by their absorption of neutrons. Another use of neutron emitters is the detection of light nuclei, in particular the hydrogen found in water molecules.