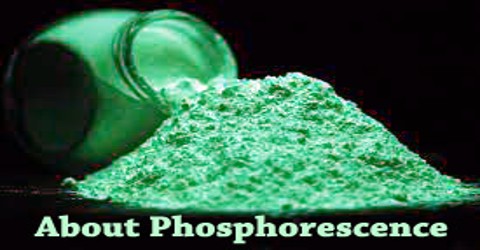 Phosphorescence is light emitted after exposure to radiation, or produced by something that doesn’t produce flame or heat. Unlike fluorescence, in which the absorbed light is spontaneously emitted about 10-8 second after excitation, phosphorescence requires additional excitation to produce radiation and may last from about 10-3 second to days or years, depending on the circumstances. In fluorescence, an electron is raised from a certain baseline energy known as the ground level to an excited level by a light photon or other radiation. It is similar to fluorescence, except that the chemical reactions within phosphorescent materials happen less often, thus they take longer to emit light. Phosphorescent materials can be recharged by being exposed to light and may store light for several hours before it is re-emitted.

Everyday examples of phosphorescent materials are the glow-in-the-dark toys, stickers, paint, and clock dials that glow for some time after being charged with a bright light such as in any normal reading or room light. Typically, the glow slowly fades out, sometimes within a few minutes or up to a few hours in a dark room. The study of phosphorescent materials led to the discovery of radioactivity in 1896. Common examples of phoshorescence include stars people put on bedroom walls that glow for hours after the lights are turned out and paint used to make glowing star murals. Although the element phosphorus glows green, this is oxidation and not an example of phosphorescence. Most photoluminescent events, in which a chemical substrate absorbs and then re-emits a photon of light, are fast, in the order of 10 nanoseconds. Light is absorbed and emitted at these fast time scales in cases where the energy of the photons involved matches the available energy states and allowed transitions of the substrate. In the special case of phosphorescence, the absorbed photon energy undergoes an unusual intersystem crossing into an energy state of higher spin multiplicity, usually a triplet state. As a result, the energy can become trapped in the triplet state with only “forbidden” transitions available to return to the lower energy state. These transitions, although “forbidden”, will still occur in quantum mechanics but are kinetically unfavored and thus progress at significantly slower time scales. Most phosphorescent compounds are still relatively fast emitters, with triplet lifetimes on the order of milliseconds. However, some compounds have triplet lifetimes up to minutes or even hours, allowing these substances to effectively store light energy in the form of very slowly degrading excited electron states. If the phosphorescent quantum yield is high, these substances will release significant amounts of light over long time scales, creating so-called “glow-in-the-dark” materials. Although phosphorescence can be advantageous, it also has several disadvantages. For example, one cannot be completely sure how bright a phosphorescent material is or how long it will emit light. While most phosphorescent products are precisely measured to provide a certain level of brightness for a few minutes or hours, fluorescent materials may be more ideal for situations that require exact results or long use.