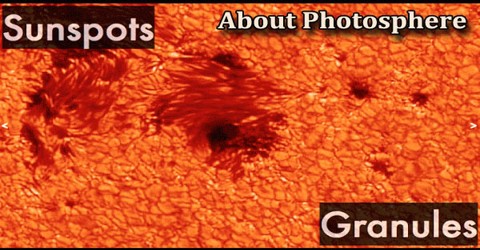 Photosphere is the lowest visible layer of a star, lying beneath the chromosphere and the corona. The term itself is derived from Ancient Greek roots, φῶς, φωτός/phos, photos meaning “light” and σφαῖρα/sphaira meaning “sphere”, in reference to the fact that it is a spherical surface that is perceived to emit light. Stars are made entirely of gas and thus have no surface per se, but the gas beneath the photosphere is opaque, so the photosphere acts as their effective visible surface; it is also the boundary from which the Sun’s diameter is measured. The Sun’s photosphere is a very thin layer made up of numerous granules (transient convective cells) where hot gases rise and give off light and heat. The photosphere of the Sun has a temperature of around 6,000°K and is the region in which sunspot activity is located. In other words, a photosphere is the deepest region of a luminous object, usually a star that is transparent to photons of certain wavelengths.

The photosphere is believed to have a thickness of approximately 400 kilometers and is where the transparency of the Sun changes from 100% down to 0%. At a depth of 200 km into the photosphere we are still able to see 89% of the light that is emitted. At a depth of 300 km we see only 64%. And by 400 km we only receive 4% of the light being emitted. Properties and Temperature of the Sun’s Photosphere

The surface of a star is defined to have a temperature given by the effective temperature in the Stefan–Boltzmann law. Stars, except neutron stars, have no solid surface. Therefore, the photosphere is typically used to describe the Sun’s or another star’s visual surface. The pressure of the gases and plasma in the Sun also gradually increases, starting at 0.0068 bar and increasing to 0.16 bar, which is a 24-fold increase. This is still much lower than the pressure on Earth, which is defined as 1 bar. The Sun is composed primarily of the chemical elements hydrogen and helium; they account for 74.9% and 23.8% of the mass of the Sun in the photosphere, respectively. The Sun’s photosphere is composed of convection cells called granules—cells of plasma each approximately 1000 kilometers in diameter with hot rising plasma in the center and cooler plasma falling in the narrow spaces between them.