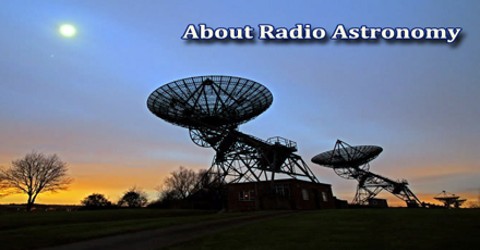 Radio astronomy is the study of celestial objects by measurement of the radio waves they emit. It has enabled the detection and study of objects such as pulsars, quasars, radio galaxies, and other objects, some of which emit considerably less radiation at other wavelengths. It has also contributed to the discovery of cosmic background radiation and has enhanced the understanding of solar activity and the structure of galaxies. Radioastronomy plays an essential role in modern-day astrophysics and is a key complement to optical astronomy. Compared to optical astronomy, which is sensitive to the hot universe (stars are generally a few thousand degrees Celsius), radiotelescopes that operate in the millimeter wavebands, such as NOEMA, probe the cold universe (around -250 degrees Celsius). It is conducted using large radio antennas referred to as radio telescopes, that are either used singularly, or with multiple linked telescopes utilizing the techniques of radio interferometry and aperture synthesis.

Radio astronomy has changed the way we view the Universe and dramatically increased our knowledge of it, for example:

Astronomers trying to identify the source of interference in a radio antenna in the 1960s discovered the Cosmic Microwave Background Radiation, the afterglow of the Big Bang.

Cold clouds of gas found in interstellar space emit radio waves at distinct wavelengths. As hydrogen is the most abundant element in the Universe and is common in galaxies, radio astronomers use its characteristic emission to map out the structure of galaxies.

Radio astronomy has also detected many new types of objects including pulsars, the rapidly spinning remnants of supernova explosions that send out regular flashes of radio waves much like the beam from a lighthouse. A Radio telescope provides alternative views to optical telescopes; they can detect invisible gas, and can reveal areas of space that may be obscured with cosmic dust. It is simply a telescope that is designed to receive radio waves from space. In its simplest form it has three components:

One or more antennas to collect the incoming radio waves. Most antennas are parabolic dishes that reflect the radio waves to a receiver, in the same way as a curved mirror can focus visible light to a point. Antennas can be other shapes however. A Yagi antenna, similar to that used for TV reception, can be used for radio astronomy as was the case in the early Dover Heights telescopes.

A receiver and amplifier to boost the very weak radio signal to a measurable level. These days the amplifiers are extremely sensitive and are normally cooled to very low temperatures to minimise interference due to the noise generated by the movement of the atoms in the metal.

A recorder to keep a record of the signal. In the early days of radio astronomy this was normally a chart recorder that drew a graph on paper in ink. Most radio telescopes nowadays record directly to some form of computer memory disk as astronomers use sophisticated software to process and analyse the data. Radio astronomy has changed the way we view the Universe and dramatically increased our knowledge of it. Traditional optical astronomy is great for studying objects such as stars and galaxies that emit a lot of visible light. Individual stars, however, are normally only weak emitters of radio waves. We detect radio waves from our Sun only because it is so close although its radio emissions can play havoc with radio communications on Earth when a solar storm erupts. The cosmic microwave background radiation was also first detected using radio telescopes. However, radio telescopes have also been used to investigate objects much closer to home, including observations of the Sun and solar activity, and radar mapping of the planets. Other sources include:

Radio waves also travel unimpeded by the dust in our galaxy so we can detect other galaxies that lay beyond the centre of our galaxy along the line of sight. These galaxies are impossible to view using visible light and optical telescopes.

Radio astronomy has detected many new types of objects. These include pulsars, rapidly spinning neutron stars that are collapsed cores of massive stars that have exhausted their fuel. Pulsars beam intense radio beams of radio waves out into space much like the beam from a lighthouse as it rotates.