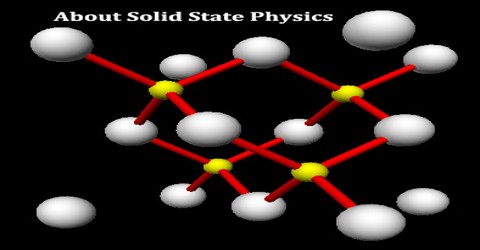 Solid State Physics is the branch of physics that studies the properties of materials in the solid state: electrical conduction in crystals of semiconductors and metals; superconductivity; photoconductivity.

The bulk of solid-state physics, as a general theory, is focused on crystals. Primarily, this is because the periodicity of atoms in a crystal — its defining characteristic — facilitates mathematical modeling. Likewise, crystalline materials often have electrical, magnetic, optical, or mechanical properties that can be exploited for engineering purposes. Modern solid state physics came of age in the late thirties and forties and is now is part of condensed matter physics which includes liquids, soft materials, and non-crystalline solids.

Today, solid-state physics is broadly considered to be the subfield of condensed matter physics that focuses on the properties of solids with regular crystal lattices.

Large communities of solid state physicists also emerged in Europe after World War II, in particular in England, Germany, and the Soviet Union. In the United States and Europe, solid state became a prominent field through its investigations into semiconductors, superconductivity, nuclear magnetic resonance, and diverse other phenomena. During the early Cold War, research in solid state physics was often not restricted to solids, which led some physicists in the 1970s and 1980s to found the field of condensed matter physics, which organized around common techniques used to investigate solids, liquids, plasmas, and other complex matter.

Matter exist usually in solid or fluid (liquid, gas) state. According to modern concept matter classification is specified as condensed state and gaseous state. Solids and liquids come under condensed state. Any material whose position of constituent particles is fixed can be regarded as solids. Solids are characterized by incompressibility, rigidity and mechanical strength. This indicates that the molecules, atoms or ions that make up as solid is closely packed. Thus in solids we will have a well ordered molecular, atomic or ionic arrangement.

In general solids can be classified into:

Crystal structure can be obtained by attaching atoms, groups of atoms or molecules which are called basis (motif) to the lattice sides of the lattice point. Bravais lattice is an infinite array of discrete points with an arrangement and orientation that appears exactly the same, from whichever of the points the array is viewed. Lattice is invariant under a translation.

Non-Bravais Lattice Bravais Lattice Not only the arrangement but also the orientation must appear exactly the same from every point in a bravais lattice. Unit cell can be considered as the building block of a crystal. It has the same symmetry as the entire crystal. When we arrange the unit cell in 3D, we get the bulk crystal. In other words it can be described as the smallest volume which when repeated in all direction gives the crystal. The three edges a, b, c along the axis and angle between them α, β and γ is termed as lattice parameters. In 3D it is better to consider a parallelepiped as unit cell.

Unit cell can be of primitive as well as non primitive type. A primitive cell is a minimum volume unit cell and has only one lattice point in it and the latter contains more than one.