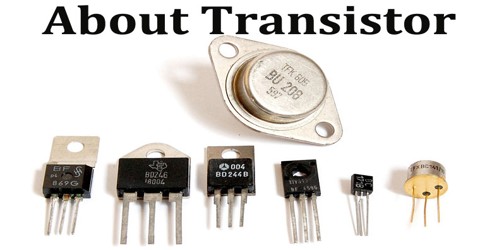 The first practical point-contact transistor was built in 1948 by William Bradford Shockley, John Bardeen, and Walter House Brattain. Patents for the concept of a transistor date as far back as 1928 in Germany, though they seem to have never been built, or at least no one ever claimed to have built them. The three physicists received the 1956 Nobel Prize in Physics for this work. There are essentially two basic types of point-contact transistors, the npn transistor and the pnp transistor, where the n and p stand for negative and positive, respectively. The only difference between the two is the arrangement of bias voltages. Other semiconductors will be p-type, in which case the electrons fill “holes” in the atomic electron shells, meaning that it behaves as if a positive particle is moving from the positive electrode to the negative electrode. The type is determined by the atomic structure of the specific semiconductor material.

Transistors are the basic elements in integrated circuits (IC), which consist of very large numbers of transistors interconnected with circuitry and baked into a single silicon microchip.

There are a wide variety of transistor types that have been developed since 1948. Here’s a list of various types of transistors: A transistor is really simple—and really complex. Let’s start with the simple part. A transistor is a miniature electronic component that can do two different jobs. It can work either as an amplifier or a switch: When it works as an amplifier, it takes in a tiny electric current at one end (an input current) and produces a much bigger electric current (an output current) at the other. In other words, it’s a kind of current booster. That comes in really useful in things like hearing aids, one of the first things people used transistors for.

Transistors can also work as switches. A tiny electric current flowing through one part of a transistor can make a much bigger current flow through another part of it. In other words, the small current switches on the larger one. This is essentially how all computer chips work. Compared to the vacuum tubes that were used previously, the transistor was an amazing advance. Smaller in size, the transistor could easily be manufactured cheaply in large quantities. They had various operational advantages, as well, which are too numerous to mention here.

Some consider the transistor to be the greatest single invention of the 20th century, since it opened so much in the way of other electronic advancements. Virtually every modern electronic device has a transistor as one of its primary active components. Because they are the building blocks of microchips, computer, phones, and other devices couldn’t exist without transistors.