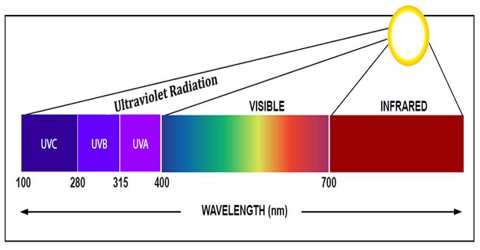 Ultraviolet Radiation is absorbed by the ozone molecules in the upper atmosphere (stratosphere), but a potentially dangerous amount passes through the ozone hole to cause cataracts, skin cancer (melanoma), and suppression of the immune system, leaf damage, and reduced yields in some crops. UV rays are generated also during electric (arc) welding. It is defined as that portion of the electromagnetic spectrum between X-rays and visible light or between 40 and 400 nanometer (nm) wavelengths. The biological effects of UV are greater than simple heating effects, and many practical applications of UV radiation derive from its interactions with organic molecules. The different sources come with some unique hazards, depending on the wavelength range of the emitted UV radiation. It was discovered in 1801 when the German physicist Johann Wilhelm Ritter observed that invisible rays just beyond the violet end of the visible spectrum darkened silver chloride-soaked paper more quickly than violet light itself. He called them “oxidizing rays” to emphasize chemical reactivity and to distinguish them from “heat rays”, discovered the previous year at the other end of the visible spectrum.

Ultraviolet rays are invisible to most humans: the lens in a human eye ordinarily filters out UVB frequencies or higher, and humans lack color receptor adaptations for ultraviolet rays. Under some conditions, children and young adults can see ultraviolet down to wavelengths of about 310 nm, and people with aphakia (missing lens) or replacement lens can also see some UV wavelengths. Near-UV radiation is visible to some insects, mammals, and birds.

Ultraviolet radiation (UVR) from the sun is made up of three types. The strength of the UV rays reaching the ground depends on a number of factors, such as: Ultraviolet radiation has both positive and negative effects on the human body. Some ultraviolet is useful and necessary, because it allows our bodies to produce vitamin D. Although we can consume vitamin D, or take supplements, it has hard for our bodies to absorb orally. Getting plenty of sunlight is therefore important for good health.

Skin cancers are one result of getting too much sun, but there are other effects as well. Sunburn and tanning are the short-term results of too much exposure to UV rays, and are signs of skin damage. Long-term exposure can cause early skin aging, wrinkles, loss of skin elasticity, dark patches (lentigos, sometimes called age spots or liver spots), and pre-cancerous skin changes, such as dry, scaly, rough patches called actinic keratoses.