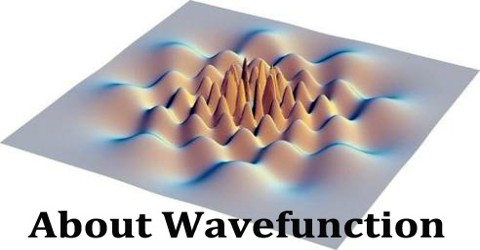 Wave function, in quantum mechanics, variable quantity that mathematically describes the wave characteristics of a particle. The value of the wave function of a particle at a given point of space and time is related to the likelihood of the particle’s being there at the time. By analogy with waves such as those of sound, a wave function, designated by the Greek letter psi, Ψ, may be thought of as an expression for the amplitude of the particle wave (or de Broglie wave), although for such waves amplitude has no physical significance.

The wavefunction equation was developed by Erwin Schrodinger, and so it is called the Schrodinger equation.

The wave function is a solution to Schrödinger’s equation, given the boundary conditions that describe the physical system in which the particle is found. The square of the absolute value of the function evaluated at a given point in space is proportional to the probability of finding the particle in the immediate vicinity of that position. The wavefunction is a complex function, which is a function containing quantities that are complex numbers and is constructed in such a way that performing an operation to take the modulus of the complex function for a given state results in a real value that represents the probability density of a result that corresponds to that state. The process of transitioning from a general quantum wavefunction into a definite value for a specific state is typically called the “collapse of the wavefunction.”

Why the Wave function is not a Physical Field? As another example, consider the electron in the hydrogen atom. Since the potential of its electrostatic self-interaction is of the same order as the Coulomb potential produced by the nucleus, the energy levels of hydrogen atoms will be significantly different from those predicted by quantum mechanics and confirmed by experimental observations. Therefore, the electrostatic self-interaction cannot exist for the wave function of a charged quantum system.

The Wave function as a Description of Quantum Motion of Particles

The failure of classical ergodic models does not exclude all possible ergodic motion of particles. If the motion of a particle is not continuous but discontinuous and random, and the probability density of the particle being in certain positions is proportional to the square of the absolute value of its wave function at every instant, then the particle can readily move throughout all possible regions where the wave function is nonzero during an arbitrarily short time interval near a given instant. This will solve the problems plagued by the classical ergodic models. The discontinuous ergodic motion requires no existence of a finite time scale. A particle undergoing discontinuous motion can also move from one region to another spatially separated region, no matter whether there is an infinite potential wall between them.