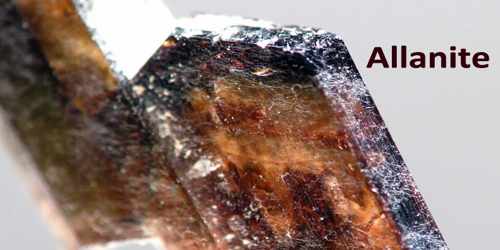 Allanite is a rare black or brown mineral consisting of the hydrated silicate of calcium, aluminium, iron, cerium, lanthanum, and other rare earth minerals. It occurs in granites and other igneous rocks. It has the general formula A2M3Si3O12[OH] where the A sites can contain large cations such as Ca2+, Sr2+, and rare earth elements and the M sites admit Al3+, Fe3+, Mn3+, Fe2+, or Mg2+ among others. Allanite is named in 1810 after Thomas Allan, the Scottish mineralogist who first noticed it. It is a member of the Epidote group. It is opaque, with a dark brown (sometimes virtually black) colour. Allanite contains up to 20% rare earth elements and is a valuable source of them. The inclusion of thorium and other radioactive elements in allanite results in some interesting phenomena. Allanite often has a pleochroic halo of radiation damage in the minerals immediately adjacent.

Occurrences and Properties of Allanite Its crystal habits include long, somewhat prismatic or tabular crystals with a typically dominant pinacoid that the crystal is often flattened against. The terminations are usually wedge shaped more rarely tapered pyramids. Also massive or as is most commonly the case, as embedded grains.