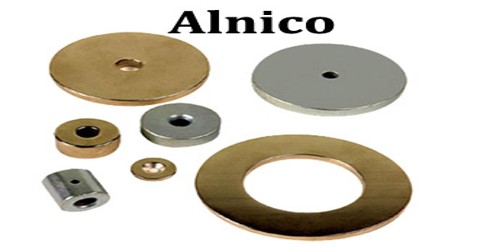 Alnico is a powerful permanent-magnet alloy containing iron, nickel, aluminum, and one or more of the elements cobalt, copper, and titanium. Alnico alloys are ferromagnetic, with a high coercivity and are used to make permanent magnets. Before the development of rare-earth magnets in the 1970s, they were the strongest type of permanent magnet. Other trade names for alloys in this family are: Alni, Alcomax, Hycomax, Columax, and Ticonal. The development of alnico began in 1931, when T. Mishima in Japan discovered that an alloy of iron, nickel, and aluminum had a coercivity of 400 oersteds (Oe; 0.07957 kA/m), double that of the best magnet steels of the time. There is a risk of chipping or breaking the magnets because all magnets are inherently brittle. It is advised to not put magnets in conditions of mechanical stress e.g. in load bearing situations. Alnico is better at resisting self demagnetisation by being longer in the direction of magnetisation than in the dimensions of the pole face, usually termed Length to Diameter, L/D, and ratio. A higher L/D ratio increases the working point on the intrinsic curve. This is why Alnico magnets are very rarely short in length, they are often seen in bar, rod or horseshoe shapes and a L/D ration of at least 4:1 is ideally required to get good performance from an Alnico magnet or an Alnico magnetic assembly, having Alnico is a ferromagnetic assembly and magnetising in-situ boosts the L/D ratio of Alnico creating a higher magnetic output.

Alnico magnets are widely used in industrial and consumer applications where strong permanent magnets are needed; examples are electric motors, electric guitar pickups, microphones, sensors, loudspeakers, magnetron tubes, and cow magnets. In many applications they are being superseded by rare-earth magnets, whose stronger fields and larger energy products allow smaller-size magnets to be used for a given application.