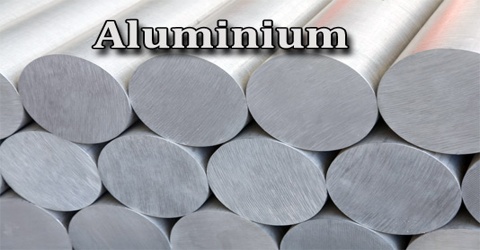 Aluminium is a silvery-white, ductile metallic element, the most abundant in the earth’s crust but found only in combination, chiefly in bauxite. Aluminium metal is so chemically reactive that native specimens are rare and limited to extreme reducing environments. Instead, it is found combined in over 270 different minerals. The chief ore of aluminium is bauxite. It makes up about 8% of the Earth’s crust; it is the third most abundant element after oxygen and silicon and the most abundant metal in the crust. Pure aluminium is a relatively soft, silvery white metal with a dull lustre that is caused by a thin coating of aluminum oxide. It is this coating, which forms almost instantly when the metal is exposed to air, that accounts for its resistance to oxidation.

Aluminium occurs naturally in many foods in low concentrations and is also present in many pharmaceuticals and drinking water. Refer to Aluminum Reaction for its reaction to Water, Oxygen & Acids. High levels in the body can be toxic. Having good conductive and thermal properties, it is used to form many hard, light, corrosion-resistant alloys. Aluminium is non-toxic (as the metal) nonmagnetic and non-sparking. The Atomic Number of this element is 13 and the Element Symbol is Al.

Production and Properties of Aluminium

The most common form of aluminium found in nature is aluminium sulphates. These are minerals that combine two sulphuric acids: one based on an alkaline metal (lithium, sodium, potassium rubidium or caesium) and one based on a metal from the third group of the periodic table, primarily aluminium. Aluminium is the most abundant metal in the Earth’s crust (8.1%) but is rarely found uncombined in nature. It is usually found in minerals such as bauxite and cryolite. These minerals are aluminium silicates. In the first stage of aluminium production bauxite is processed into alumina, or aluminium oxide Al2O3. Alumina looks like white powder and it is then processed into aluminium at aluminium smelters using electrolytic reduction.

Aluminium production requires huge amounts of electricity, about 15 MWH per tonne of output. That’s approximately as much as a 100-apartment block consumes in a month. So the best site for an aluminium smelter is next to a powerful, preferably renewable, energy source. Hydroelectric power plants are the best option as they are the most powerful ‘green’ energy sources available today. Aluminium offers a rare combination of valuable properties. It is one of the lightest metals in the world: it’s almost three times lighter than iron but it’s also very strong, extremely flexible and corrosion resistant because its surface is always covered in an extremely thin and yet very strong layer of oxide film. It doesn’t magnetise, it’s a great electricity conductor and forms alloys with practically all other metals.

Aluminium is used in a huge variety of products including cans, foils, kitchen utensils, window frames, beer kegs and aeroplane parts. This is because of its particular properties. It has low density, is non-toxic, has a high thermal conductivity, has excellent corrosion resistance and can be easily cast, machined and formed. It is also non-magnetic and non-sparking. It is the second most malleable metal and the sixth most ductile. It is often used as an alloy because aluminium itself is not particularly strong. Alloys with copper, manganese, magnesium and silicon are lightweight but strong. They are very important in the construction of aeroplanes and other forms of transport. It is a good electrical conductor and is often used in electrical transmission lines. It is cheaper than copper and weight for weight is almost twice as good a conductor.

When evaporated in a vacuum, aluminium forms a highly reflective coating for both light and heat. It does not deteriorate, like a silver coating would. These aluminium coatings have many uses, including telescope mirrors, decorative paper, packages and toys.