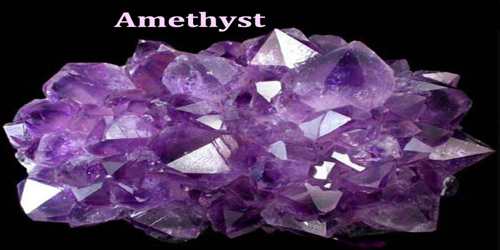 Amethyst is a purple or violet, transparent form of quartz used as a gemstone. The color is caused by the presence of iron compounds in the crystal structure. It is the most popular purple gem and one of the most popular gemstones of all time. Amethyst is used to produce faceted stones, cabochons, beads, tumbled stones, and many other items for jewelry and ornamental use. The name comes from the Koine Greek ἀμέθυστος amethystos from ἀ- a-, “not” and μεθύσκω methysko / μεθύω methyo, “intoxicate”, a reference to the belief that the stone protected its owner from drunkenness. The ancient Greeks wore amethyst and carved drinking vessels from it in the belief that it would prevent intoxication.

It has always been associated with February, the month the Romans dedicated to Neptune, their water-god, and is the traditional birthstone of that month. It is the stone of St. Valentine and faithful love, and signifies ecclesiastical dignity as the Bishop’s Stone. It carries the energy of fire and passion, creativity and spirituality, yet bears the logic of temperance and sobriety.

Structure and Properties of Amethyst

Molecular structure of amethyst consists of chains of silicon tetrahedrons with six-sided pointed long pyramids. Most of the amethyst mined from different places and sources show remarkable differences in the molecular structure. Amethyst is a purple variety of quartz (SiO2) and owes its violet color to irradiation, iron impurities, in some cases in conjunction with transition element impurities, and the presence of trace elements, which result in complex crystal lattice substitutions. Molecular structure is defined as a way molecules attach to each other. Quartz is long crystal with six sides. The external appearance of quartz crystal show regular arrangement of atoms. The angles of the sides of crystal are constant because it is made up same atom that is one atom of silicon for every two atoms of oxygen. The molecular formula is also similar SiO2. Amethyst belongs to silicate mineral category which has structures containing silica tetrahedral, which is a tetrahedron with silicon at the centre surrounded by 4 oxygen anions.

The color in amethyst from most localities is unevenly distributed in the individual crystals. In amethyst geodes it is often most intense in the growth zones under the rhombohedral faces (at the tips). Occasionally the color is deeper under either the r or z rhombohedral faces, giving the crystal a pinwheel appearence when viewed from the top. In prismatic crystals the color may appear in phantom-like thin layers, while in scepters and skeleton quartz the color is often concentrated along the edges, and accompanied by smoky zones. Despite the intense color, the content of iron occupying Si positions in amethyst is rather low, in the 10-100 ppm range.

In nature, Amethyst at times forms in combination with other minerals. In addition to the properties of Amethyst outlined in this article, the following varieties possess additional qualities. Amethyst’s ability to expand the higher mind also enhances one’s creativity and passion. It strengthens the imagination and intuition, and refines the thinking processes. It helps in the assimilation of new ideas, putting thought into action, and brings projects to fruition. It is a talisman of focus and success.

Amethyst is a wonderful talisman for use in the creative arts, especially in darker shades. It assists endeavors where new, original results need to be created using tools and methods of the past. It is often used as the Artist’s Stone, the Composer’s Stone, the Inventor’s, Poet’s and Painter’s Stones. Keep an Amethyst crystal or cluster in the area to focus and amplify the creative elements of the Universal Life Force.