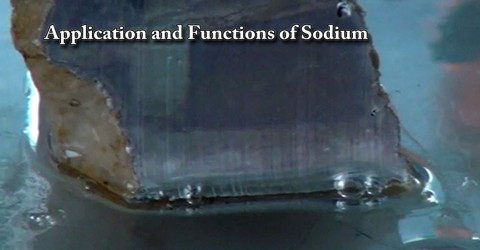 Application and Functions of Sodium

Application and Functions of Sodium

Sodium is an essential element for all animals and some plants. It’s Atomic number 11; atomic weight 22.99; melting point 97.7°C; boiling point 883°C; specific gravity 0.971; valence 1. Sodium ions are the major cation in the extracellular fluid (ECF) and as such are the major contributor to the ECF osmotic pressure and ECF compartment volume. Loss of water from the ECF compartment increases the sodium concentration, a condition called hypernatremia. Isotonic loss of water and sodium from the ECF compartment decreases the size of that compartment in a condition called ECF hypovolemia. Pure sodium metal is very soft and can be cut with a dull knife. It can conduct heat and electricity; however it is rarely used for this purpose. The melting point of sodium metal is 208.0 degrees Fahrenheit, and it boils at 1621.3 degrees Fahrenheit. It is not a dense metal and will float on water. The most common form of sodium has an atomic weight of 23 amu (atomic mass units). However, the average atomic weight of sodium is 22.99 amu. Sodium can reduce many oxides of other metals and it is often used as reducing agent, just as its hidride. It forms alloys with many metals, with special relevance to lead and mercury. From the reaction with several organic substances inumerous derivates result as well as free radicals, many of them important used in organic synthesis, like polymerization reactions. Biological Action – Sodium is an essential biological element to the more advanced animals; the ratio sodium/potassium concentrations in intercellular and extracellular fluids is responsible for the transport ions through the cellular membranes, the regulation of the osmotic pressure inside the cell, the transmission of nervous pulses and other electrophisiological functions.

Since there no reserve store of sodium ions in the animal body, losses above the amount of intake come from the functional supply of cells and tissues. This depletion results in serious symptoms and even death. Thus, the importance of NaCl in nutrition has been recognized since prehistoric times. Human populations living on grains, vegetables and fruits experience a salt hunger that causes them to get to great lengths to obtain salt. Sodium deficiency may result from extreme excretion of sodium ion by sweating and other loss of body fluids. It is evidenced by thirst, anorexia and nausea. Other results of severe sodium loss are lassitude, muscle cramps and mental disturbances.

The science of salt – Sodium is a metallic element, which, in its ionic form, is the positive part of sodium chloride (common table salt) and other sodium compounds.

Necessary for fluid balance – Sodium is mostly found in the fluid outside of the cells along with negative chloride ions. In concert with potassium and chloride, sodium helps to maintain fluid balance and electrolyte balance.

Many foods contain sodium – Sodium compounds are found in many foods. It is particularly abundant in processed foods, and for this reason, it is unlikely that you are not getting enough sodium. Excessive sweating, diarrhea or vomiting may cause a temporary loss of sodium, but actual deficiency from dietary cause is rare. Our body has the ability to adapt the amount of sodium that is retained or excreted based on the needs of the moment. Fluid Balance – Sodium also works in concert with potassium to maintain normal water balance in the body. Each of the minerals chemically attracts water to itself, thus assuring that optimal levels of hydration are maintained both inside human cells and outside the cells, in the extracellular spaces that surround them. In healthy people, Brown writes, the body has a built-in mechanism to guard against the effects of occasional excess levels of sodium, but continued intake of high amounts of sodium can eventually override this safety valve and lead to hypertension.

Physically – Sodium at standard temperature and pressure is a soft silvery metal that combines with oxygen in air and forms grayish white sodium oxide unless immersed in oil or inert gas, which are the conditions it is usually stored in. Sodium metal can be easily cut with a knife and is a good conductor of electricity and heat because it has only one electron in its valence shell, resulting in weak metallic bonding and free electrons, which carry energy.