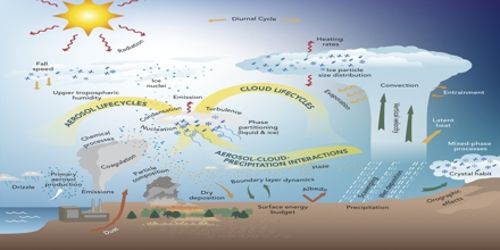 Thermodynamics deals with the transformations of the energy in a system and between the system and its environment. Hence, it is involved in every atmospheric process, from the large scale general circulation to the local transfer of radiative, sensible and latent heat between the surface and the atmosphere and the microphysical processes producing clouds and aerosol.

Atmospheric thermodynamics is the study of heat-to-work transformations that take place in the earth’s atmosphere and manifest as weather or climate.

In the early 19th century thermodynamicists such as Sadi Carnot, Rudolf Clausius, and Émile Clapeyron developed mathematical models on the dynamics of fluid bodies and vapors related to the combustion and pressure cycles of atmospheric steam engines; one example is the Clausius–Clapeyron equation. In 1873, thermodynamicist Willard Gibbs published “Graphical Methods in the Thermodynamics of Fluids.” The Hadley Circulation can be considered as a heat engine. The Hadley circulation is identified with rising of warm and moist air in the equatorial region with the descent of colder air in the subtropics corresponding to a thermally driven direct circulation, with consequent net production of kinetic energy. The thermodynamic efficiency of the Hadley system, considered as a heat engine, has been relatively constant over the 1979~2010 period, averaging 2.6%. Over the same interval, the power generated by the Hadley regime has risen at an average rate of about 0.54 TW per yr; this reflects an increase in energy input to the system consistent with the observed trend in the tropical sea surface temperatures.

The thermodynamic behavior of a hurricane can be modelled as a heat engine that operates between the heat reservoir of the sea at a temperature of about 300K (27 °C) and the heat sink of the tropopause at a temperature of about 200K (−72 °C) and in the process converts heat energy into mechanical energy of winds. Parcels of air traveling close to the sea surface take up heat and water vapor, the warmed air rises and expands and cools as it does so causes condensation and precipitation. The rising air, and condensation, produces circulatory winds that are propelled by the Coriolis force, which whip up waves and increase the amount of warm moist air that powers the cyclone.

The Ideal Gas Law: An equation of state describes the relationship among pressure, temperature, and density of any material. All gases are found to follow approximately the same equation of state, which is referred to as the “ideal gas law (equation)”.

Gas Constant: The ideal gas law can be applied to the combination of atmospheric gases or to individual gases.

The Scale Height of the Atmosphere: One way to measure how soon the air runs out in the atmosphere is to calculate the scale height, which is about 10 km. Over this vertical distance, air pressure and density decrease by 37% of its surface values.

Conclusion: The theory of thermodynamics is one of the cornerstones and crowning glories of classical physics. It has applications not only in physics, chemistry, and the Earth sciences, but in subjects as diverse as biology and economics. Thermodynamics plays an important role in our quantitative understanding of atmospheric phenomena ranging from the smallest cloud microphysical processes to the general circulation of the atmosphere.