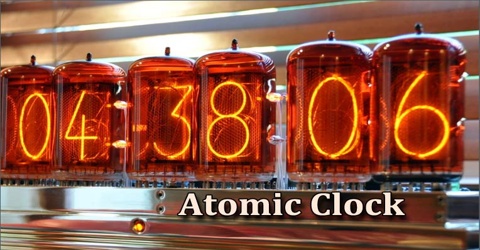 Atomic clock is an extremely precise clock whose rate is controlled by a periodic process, such as vibration, or the absorption or emission of electromagnetic radiation that occurs at a steady rate in atoms or molecules. It is the most accurate type of timepiece in the world, designed to measure time according to vibrations within atoms. Atomic clocks are the most accurate time and frequency standards known, and are used as primary standards for international time distribution services, to control the wave frequency of television broadcasts, and in global navigation satellite systems such as GPS. Atomic clock” (or “cesium-beam frequency standard”) is a device that uses as a reference the exact frequency of the microwave spectral line emitted by atoms of the metallic element cesium, in particular its isotope of atomic weight 133 (“Cs-133”). The integral of frequency is time, so this frequency, 9,192,631,770 hertz (Hz = cycles/second), provides the fundamental unit of time, which may thus be measured by cesium clocks.

The standard atomic clock is based on the vibrations of cesium atoms and is so accurate that it would gain or lose less than one second in three million years. Atomic clocks are used to help track satellites, run navigation systems, and study movements of the Earth’s crust.

History and Mechanism of Atomic Clock

The first atomic clock, invented in 1948, utilized the vibrations of ammonia molecules. The error between a pair of such clocks, i.e., the difference in indicated time if both were started at the same instant and later compared, was typically about one second in three thousand years. In 1955 the first cesium-beam clock was placed in operation at the National Physical Laboratory at Teddington, England. It is estimated that such a clock would gain or lose less than a second in three million years. The idea of using atomic transitions to measure time was suggested by Lord Kelvin in 1879. Magnetic resonance, developed in the 1930s by Isidor Rabi, became the practical method for doing this. In 1945, Rabi first publicly suggested that atomic beam magnetic resonance might be used as the basis of a clock. NIST-F1, the United States’ standard atomic clock, is said to be so accurate that it would neither gain nor lose a second in over 30 million years.

Fountain atomic clocks, they consist of a 3-foot vertical tube inside a taller structure, and use lasers to cool cesium atoms, forming a ball of atoms that lasers then toss into the air, much like one would toss a tennis ball, creating a fountain effect. This allows the atoms to be observed for much longer than could be done with any previous clock. NIST-F2’s greater accuracy is achieved by operating at -193°C (-315.4°F) instead of at 27°C (80.6°F).

Atomic clocks have never been widely used in consumer products because they are typically large and use too much power. Recently, however, NIST developed atomic clockwork that overcomes these problems. About the size of a grain of rice and accurate to within one second in 126 years, the new mechanism could soon be manufactured on computer chips and used in consumer market handheld devices, such as radios, GPS systems, and cellular telephones. Prototypes of atomic clocks using atoms such as hydrogen or beryllium could be still thousands of times more accurate. Atomic clocks are installed at sites of time signal radio transmitters; they are used at some long wave and medium wave broadcasting stations to deliver a very precise carrier frequency. The atomic clocks are used in many scientific disciplines such as for long baseline interferometry in radioastronomy.

The principle of operation of the atomic clock is not based on the nuclear physics but rather on the atomic physics, it uses the microwave signal that the electrons in the atoms emit when they change the energy levels. Atomic clocks are also used in the mobile telephone, the land line telephones, the internet, the aviation programs, and the digital television. But the real benefits of using the optical atomic clocks comes in when one looks at the implications of increased precision in the scientific measurements.