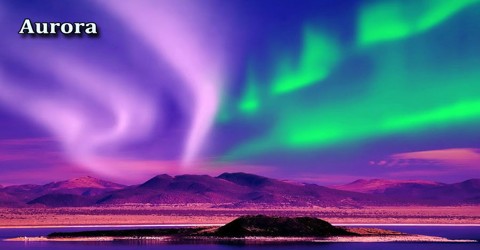 Aurora is a luminous phenomenon that consists of streamers or arches of light appearing in the upper atmosphere of a planet’s magnetic Polar Regions and is caused by the emission of light from atoms excited by electrons accelerated along the planet’s magnetic field lines. An aurora can happen at either of the Earth’s magnetic poles, north or south. The two types of auroras are called aurora borealis and aurora australis — which mean northern lights and southern lights, respectively. Coloured light in the night sky near the Earth’s magnetic poles, called aurora borealis (‘northern lights’) in the northern hemisphere and aurora australis (‘southern lights’) in the southern hemisphere. Although auroras are usually restricted to the polar skies, fluctuations in the solar wind occasionally cause them to be visible at lower latitudes. An aurora is usually in the form of a luminous arch with its apex towards the magnetic pole, followed by arcs, bands, rays, curtains, and coronae, usually green but often showing shades of blue and red, and sometimes yellow or white. Auroras are caused at heights of over 100 km/60 mi by a fast stream of charged particles from solar flares and low-density ‘holes’ in the Sun’s corona. These are guided by the Earth’s magnetic field towards the north and south magnetic poles, where they enter the upper atmosphere and bombard the gases in the atmosphere, causing them to emit visible light.

The most distinctive and brightest are the curtain-like auroral arcs. Each curtain consists of many parallel rays, each lined up with the local direction of the magnetic field, consistent with auroras being shaped by Earth’s magnetic field. The color of the aurora depends on the wavelength of the light emitted. Red: At the highest altitudes, excited atomic oxygen emits at 630.0 nm (red); low concentration of atoms and lower sensitivity of eyes at this wavelength make this color visible only under more intense solar activity. The low amount of oxygen atoms and their gradually diminishing concentration is responsible for the faint appearance of the top parts of the “curtains”. Scarlet, crimson, and carmine are the most often-seen hues of red for the auroras.

Green: At lower altitudes the more frequent collisions suppress the 630.0 nm (red) mode: rather the 557.7 nm emission (green) dominates. Fairly high concentration of atomic oxygen and higher eye sensitivity in green make green auroras the most common. The excited molecular nitrogen plays a role here, as it can transfer energy by collision to an oxygen atom, which then radiates it away at the green wavelength. The rapid decrease of concentration of atomic oxygen below about 100 km is responsible for the abrupt-looking end of the lower edges of the curtains. Both the 557.7 and 630.0 nm wavelengths correspond to forbidden transitions of atomic oxygen, slow mechanism that is responsible for the graduality (0.7 s and 107 s respectively) of flaring and fading.

Ultraviolet: Ultraviolet light from auroras has been observed with the requisite equipment. Ultraviolet auroras have also been seen on Mars, Jupiter and Saturn.

Infrared: Infrared light, in wavelengths that are within the optical window, is also part of many auroras.

Yellow and Pink are a mix of red and green or blue. Other shades of red as well as orange may be seen on rare occasions; yellow-green is moderately common. As red, green, and blue are the primary colours of additive synthesis of colours, in theory practically any colour might be possible but the ones mentioned in this article comprise a virtually exhaustive list. The aurora is caused by charged particles from the solar wind hitting atoms in the Earth’s upper atmosphere. The Sun emits a stream of electrons and protons called the solar wind. These particles interact with the Earth’s magnetic field and are funneled towards the magnetic poles, which is why aurora is visible at high latitudes. The different colors in the aurora come from different atoms being excited. Green aurora comes from the excitation of oxygen. Red and blue aurora comes from the excitation and ionization of nitrogen atoms. It has been seen on several planets in our solar system. For example, aurora has been observed on Jupiter, Jupiter’s moons Io, and Ganymede, or Saturn.

Geomagnetic disturbance from an enhanced solar wind causes distortions of the magnetotail (“magnetic substorms”). These ‘substorms’ tend to occur after prolonged spells (hours) during which the interplanetary magnetic field has had an appreciable southward component. This leads to a higher rate of interconnection between its field lines and those of Earth.

Acceleration of auroral charged particles invariably accompanies a magnetospheric disturbance that causes an aurora. This mechanism, which is believed to predominantly arise from wave-particle interactions, raises the velocity of a particle in the direction of the guiding magnetic field. Both electromagnetic and electrostatic waves, produced at the time of greater geomagnetic disturbances, make a significant contribution to the energising processes that sustain an aurora. Particle acceleration provides a complex intermediate process for transferring energy from the solar wind indirectly into the atmosphere.