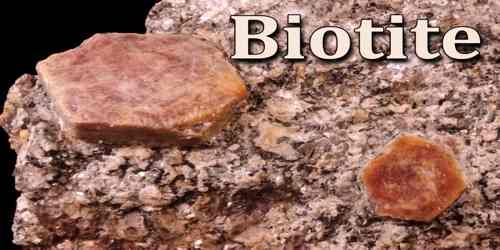 Biotite is a dark-brown or dark-green to black mica. Biotite is monoclinic and is found in igneous, metamorphic, and sedimentary rocks. It was named by J.F.L. Hausmann in 1847 in honor of the French physicist Jean-Baptiste Biot, who performed early research into the many optical properties of mica. Its chemical formula: K(Mg,Fe)3(Al,Fe)Si3O10(OH)2. Biotite can come in enormous crystal sheets that can weigh several hundred pounds. Thin sheets can be peeled off as layers, and the thinner a layer is peeled the greater its transparency becomes. It is sometimes called “iron mica” because it is more iron-rich than phlogopite. It is also sometimes called “black mica” as opposed to “white mica” (muscovite) – both forms in the same rocks, and in some instances side-by-side.

Biotite crystals are in thick flakes, micaceous masses and groupings, and in tabular, foliated, flaky, and scaly forms. Crystals may also be elongated with one dimension flat, or stubby triangular or hexagonally shaped crystals. Also forms in prismatic barrel-shaped or tapered pyramid-shaped crystals composed of dense parallel plates, and as rounded nodules of dense crystals.

Biotite is a common rock-forming mineral, and is especially noted in metamorphic rocks such as schist and gneiss. It is also found in igneous rock such as granites and rhyolites. Biotite is also the primary mica in rare earth pegmatites. It is very hard to clean because if washed it will absorb water internally and start to break apart. The best way to wash Biotite and other Micas is with a dry electric toothbrush.

Occurrence and Properties of Biotite

Biotite is a primary mineral found in a wide range of crystalline igneous rocks such as granite, diorite, gabbro, peridotite, and pegmatite. It also forms under metamorphic conditions when argillaceous rocks are exposed to heat and pressure to form schist and gneiss. Although biotite is not very resistant to weathering and transforms into clay minerals, it is sometimes found in sediments and sandstones. Biotite is occasionally found in large cleavable crystals, especially in pegmatite veins, as in New England, Virginia and North Carolina. Other notable occurrences include Bancroft and Sudbury, Ontario. It is an essential constituent of many metamorphic schists, and it forms in suitable compositions over a wide range of pressure and temperature. It has been estimated that biotite comprises up to 7% of the exposed continental crust. The largest documented single crystals of biotite were approximately 7 m2 (75 sq ft) sheets found in Iveland, Norway.

Biotite is very easy to identify, and with a little experience a person will be able to recognize it on sight. It is a name used for a number of black mica minerals that have different chemical compositions but very similar physical properties. These minerals generally cannot be distinguished from one another without laboratory analysis. A small list of the biotite minerals is given below with their chemical compositions. It has four prism faces and two pinacoid faces to form a pseudohexagonal crystal. Although not easily seen because of the cleavage and sheets, fracture is uneven. It appears greenish to brown or black, and even yellow when weathered. It can be transparent to opaque, has a vitreous to pearly luster, and a grey-white streak. When biotite is found in large chunks, they are called “books” because it resembles a book with pages of many sheets. The color of biotite is usually black and the mineral has a hardness of 2.5-3 on the Mohs scale of mineral hardness. Biotite has a small number of commercial uses. Ground mica is used as filler and extender in paints, as an additive to drilling muds, as an inert filler and mold-release agent in rubber products, and as a non-stick surface coating on asphalt shingles and rolled roofing. It is also used in the potassium-argon and argon-argon methods of dating igneous rocks. It has been known to cause excitement in inexperienced gold panners. Biotite is also useful in assessing temperature histories of metamorphic rocks, because the partitioning of iron and magnesium between biotite and garnet is sensitive to temperature.