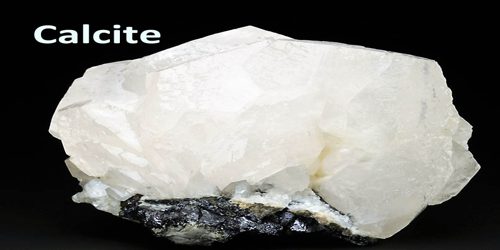 Calcite is a usually white, clear, pale-yellow or blue orthorhombic mineral. Calcite occurs in many different forms and is the main component of chalk, limestone, and marble. It is a polymorph of aragonite. It is a rock-forming mineral with a chemical formula of CaCO3. The Mohs scale of mineral hardness, based on scratch hardness comparison, defines value 3 as “calcite”. Calcite is the principal constituent of limestone and marble. These rocks are extremely common and make up a significant portion of Earth’s crust. They serve as one of the largest carbon repositories on our planet. Calcite is derived from the German Calcit, a term coined in the 19th century from the Latin word for lime, calx (genitive calcis) with the suffix -ite used to name minerals. It is thus etymologically related to chalk.

Occurrences and Properties of Calcite The largest documented single crystal of calcite originated from Iceland, measured 7×7×2 m and 6×6×3 m and weighed about 250 tons. It may also be found in volcanic or mantle-derived rocks such as carbonatites, kimberlites, or rarely in peridotites. Calcite is found in spectacular form in the Snowy River Cave of New Mexico as mentioned above, where microorganisms are credited with natural formations. Trilobites, which became extinct a quarter billion years ago, had unique compound eyes that used clear calcite crystals to form the lenses.

The properties of calcite make it one of the most widely used minerals. It is used as a construction material, abrasive, agricultural soil treatment, construction aggregate, pigment, pharmaceutical and more. It has more uses than almost any other mineral. It occurs in a great variety of shapes, with the most common forms asrhombohedral and scalenohedral crystals. Crystals may be tabular, acicular, prismatic, flaky, and needle-like. May occur as bundles of scalenohedrons, intergrown rhombohedrons, hair-like masses of acicular crystals, grainy, stalactitic, fibrous, massive, and earthy. Scalenohedral twinning is common.

It has a defining Mohs hardness of 3, a specific gravity of 2.71, and its luster is vitreous in crystallized varieties. Color is white or none, though shades of gray, red, orange, yellow, green, blue, violet, brown, or even black can occur when the mineral is charged with impurities.

Calcite may form as an undesirable coating on top of another mineral. The Calcite can be easily burned off by soaking it in acid, which will cause it to effervesce and eventually dissolve, leaving the mineral below exposed. Calcite is the primary ore of calcium. Calcite is indispensable in the construction industry, forming the base of cement. Many important chemicals are created from Calcite, as well as useful drugs. It is also crucial in the manufacture of fertilizers, metals, glass, rubber, and paint. The transparent Iceland spar variety, in which the double refraction is very apparent, was used as prisms for polarizing microscopes and other optical devices.

Calcite, obtained from an 80 kg sample of Carrara marble, is used as the IAEA-603 isotopic standard in mass spectrometry for the calibration of δ18O and δ13C.

Calcite also forms rocks that are used for ornamental purposes, such as marble and banded travertine or tufa. Calcite is also the main component of chalk, which is processed for drawing chalk. To collectors, Calcite is one of the best-known and most commonly collected minerals. Most specimens are inexpensive except for those of exceptional size and crystal form, or from classic occurrences.