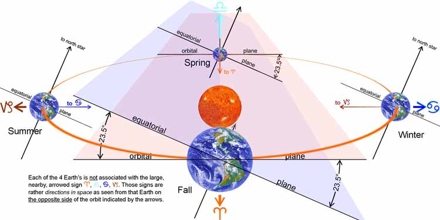 What is the cause for Precession of Equinoxes?

Major purpose of this lecture is to present on cause for Precession of Equinoxes. Precession is caused by the torque applied by the Sun, the Moon, and the planets. The torque is the result of the gravitational pull on Earth’s equatorial bulge. The lower left picture explains the effect due to the Sun. The lower right picture shows the 26000 year period precession of the north celestial pole. Earth’s precession was historically called the precession of the equinoxes, because the equinoxes moved westward along the ecliptic relative to the fixed stars, opposite to the yearly motion of the Sun along the ecliptic.